Pam’s Pictorama Photo Post: Once in awhile I do a random search at the crossroads of my two interests, early film and cats. It rarely turns anything up, but once in awhile I find something of interest. (The first such score of a photo of a young Jean Arthur holding a toy black cat can be found here.) This interesting 8″x10″ of Bessie Love playing with a kitten materialized the other day.

Both in subject and in execution, it appears to be a candid photo snatched up at the studio on the spur of the moment. (The quality of the photo suggests that it isn’t a proper still or photo shot under optimum conditions, although an original photo.) It is inscribed only Bessie Love on the back and is undated. It has many pin holes poked in the corners and has obviously spent time, beloved, on someone’s wall or board, held by push pins. Bessie has her luxurious hair (in my opinion one of her outstanding features in her early years) tucked under this kerchief, protecting it between scenes.

The tiny kitten has an unreasonably large rope tied around him or her, a serious attempt at keeping it where someone wanted it, but still ready for a little play with Bessie however. The kitten has that vaguely adolescent look, getting a little leggy and a tad less fluffy adorable. Let’s hope the complicated rope corralling of this fellow or gal meant that someone was taking care of this kit and (for those of us who worry about such things) it ultimately had a good home.

For those of you who are not familiar with Bessie, a quick bit about her and an early few photos below snatched off of Google. Born Juanita Horton in Midland, Texas in 1898. The young Bessie was eventually introduced to D. W. Griffith at Biograph Studios by Tom Mix of all people. She generally played wholesome parts, although I think it is fair to think she was a tad less utterly wholesome in her personal life. I found reference to her liking to promote herself playing the uke in somewhat rougher joints and venues for which she was criticized.

I probably first saw her in The Good Bad Man with Douglas Fairbanks in 1916. (Available on Youtube here if you are curious.) However, my first distinct memory of her was seeing her in The Matinee Idol one afternoon at the Museum of Modern Art, a film notable for having been directed by a young Frank Capra, made in 1928. Bessie transitioned into talkies and, although her star fades decidedly by the 1930’s, she continues working at least in bit parts, for virtually her entire life. I tend to think of her as playing a lot of roommates and best friends in thirties films of a type.

Eventually she makes her way to England and continues working there on stage and film, embraces Christian Science as a religion. She has parts in both Hollywood films Reds and Ragtime notably however. The last entry listed in her filmography is in The Hunger in 1983. She died in 1986. 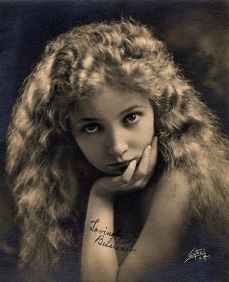 Meanwhile, I am glad someone managed to capture her on this sunny day, playing with this little cat between scenes, for posterity – and I am very pleased it has come to take its place in my kitty photo archive.