Pam’s Pictorama Post: In these days of multiple piercings and tattoos my memory of getting my ears pierced seems quaint. I was twelve or thirteen and I was at the mall with my cousin Patti one afternoon when I had it done – they used a piercing gun and zip, zip and there you go. I had small 18k gold studs with tiny gold balls installed in my ears. I was told to put peroxide on them morning and night with a q-tip, and to twirl them occasionally to make sure they healed properly.

It wasn’t until the next morning at breakfast that my mother noticed them. My parents tended toward the distracted and I felt like I had to more or less wave a flag before mom noticed. Much to my surprise she was freaked out that I hadn’t discussed it with her  – turns out she doesn’t especially like pierced ears. We had never talked about it and I was a bit stunned. I guess I figured they were my ears to do with what I would and I more or less told her that. I wasn’t a mouthy or difficult kid and the answer ultimately mollified her and this was a difference of opinion. We had a truce.

Meanwhile, my ears healed slowly and not without detours through periods of bleeding and infection. As soon as they were sufficiently healed I wandered into the heady world of earrings and there was a vast selection of options. Even maintaining that the posts would always be at least 14k gold (and gold was cheaper then so this was possible even at the lower end) I was able to acquire an array fairly quickly. However, suffice it to say that my ears never adapted to metal in them and I began a several year slog of on and off infections and bleeding. I last wore pierced earrings to my high school prom ending in copious bleeding, followed by yet another infection and I swore off them for life. I became a clip-on screw back earring devotee.

For the folks out there who have taken this path, you know that earrings affixed in this way are just not comfortable for any period of time, especially if you spend time on the telephone, tucked between ear and shoulder. (Yes, that is starting to seem quaint too, but for many years it was a real issue.) However, being the kind of gal who cannot resist bling and bejeweled I have collected some if not a vast number of earrings.

It was my general bejeweled-ness that probably lead the very same cousin Patti (who has no memory of the ear piercing adventure) to offer me this lovely pair of earrings she found while cleaning out her ancestral home. They belonged to my great-grandmother, the point where our mutual genes branch out from. This makes them very special to me as I have nothing else from that great-grandmother.

Not only were these earrings pierced, but they had a particularly evil pierced/screw-on combo that I gather existed in the late 19th and early 20th century. I didn’t take a photo of the back before having them converted, but I show another pair found online below – instruments of torture! How did that work? Ouch! 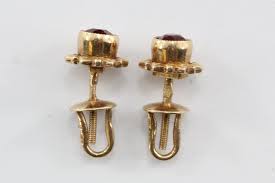 My maternal grandmother’s family was never especially well off. However, since they were in the restaurant business at least the family never went hungry. (I have written about this side of my family before and one based on a historic photo that Patti found can be read here and here.) Nonetheless, there was never a surplus of money and not much jewelry has been handed down from them.

In recent years I have considered having my now long-closed piercings redone as a world of earring opportunities does tempt me. The possibility that my ears are actually allergic to gold exists, or perhaps that the placement of the original piercing not ideal. Somehow even for someone as devoted to adornment as I am, the idea of the process does not appeal to me and I have not (yet) pursued it. Having recently gotten these back from the jeweler, I will stick with sporting them for now.