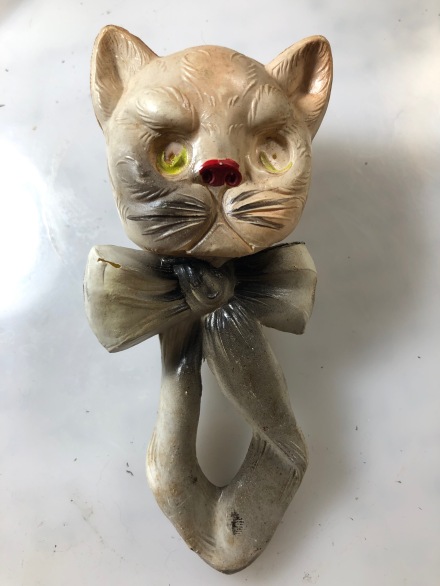 Pam’s Pictorama Toy Post: I have made much of my reticence to acquire these delicate celluloid toys known and a few of the times I have written about them can be found at these links here – Fear of Celluloid, Funny Little Felix and Ding Dong Kitty. However, I am here again today with an item I have purchased whose fragility in some ways defies its very creation as a baby toy. This rattle was made to be extra light and to a large degree expendable I would think. After all, they were purchased for baby to chew on, beat against things and, yes – rattle, and ultimately probably to lose if not mutilated entirely.

This one has a splendid rattle and kitty Cookie immediately took an intent interest, even as I removed it from the box and packing it was shipped in. Between the great rattle and the cat shape, I would imagine that this fellow would have been one of baby’s favorites. One of the weird things about celluloid is how light it is – it has no weight at all really, so it is easy to imagine that even a very small infant could have made this one of the first items it was able to clench in their tiny fists. Oh the better to command that rattle yourself!

As you can see below, he has not survived unscathed, and the back of his head is dented. He bears no markings of manufacture or place of origin. I have a nagging feeling I have seen the cat face before on something. It has to be said that he isn’t an especially jolly puss, is he? I might go so far as to say a sour puss. Still, with the shape of him, that big bow and the nice little handle (good for some chewing too) I can imagine being perfectly charmed by mom waving him in my face. I don’t pretend to know anything about contemporary toys for tots, but somehow I doubt there are rattles quite as charming as this one. If I am wrong, please let me know. 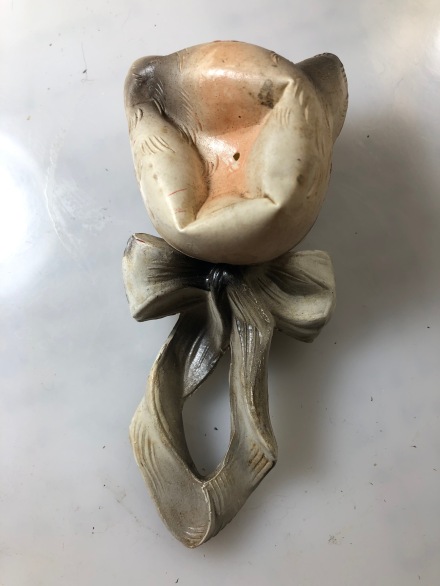 Somehow he has wandered into this century and come to rest, for now anyway, among other cherished cat items where he will hopefully remain unscathed for a bit. That assumes that I keep him away from Cookie. Kitty claws and teeth can do more damage than a small child is likely to I do believe.