Kim drew Little Saint Elizabeth into this illustration in his Alias the Cat!

Pam’s Pictorama Post: In some ways it is crazy to think I can tackle this subject in a blog post so I will start by saying, this is a warning shot over the bow – I am just skimming the top of very deep water indeed today with an expectation of subsequent entries.

As the author of childhood favorites such as A Little Princess, The Secret Garden and Little Lord Fauntleroy we all know Frances Hodgson Burnett and the classic films (and many remakes) made from her stories. I read them as an adult and especially loved The Secret Garden. As much as I liked the film, the book had much more flavor and depth.

I had not however given these stories or her much thought in years however when Kim stumbled on and purchased Little Saint Elizabeth a beautifully illustrated volume of stories, ostensibly for children although the title story is a bit gruesome and had a similar, appalling ending to Anderson’s Little Match Girl. We found it at the now mostly eradicated flea market on 24th Street here in Manhattan. He purchased it for very little and we considered it quite the score. 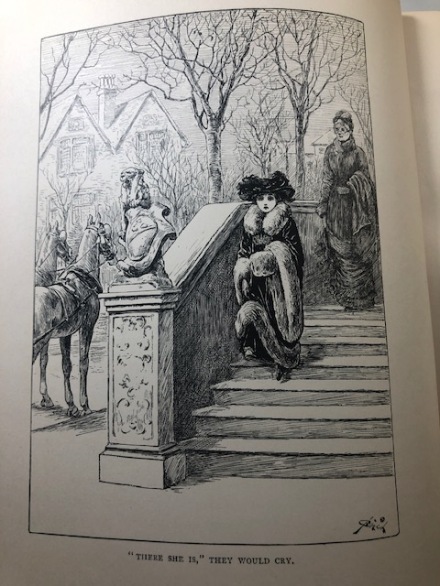 From the story Little Saint Elizabeth

Somehow it did not inspire further digging at the time and it wasn’t until a few months ago, while whining one night in bed about a delay in receiving my next volume of the Judy Bolton series to arrive (future post about that series pending there), that Kim suggested I poke around Burnett’s adult fiction. (May I just take a moment out to say, you really do want to marry someone who is going to make helpful, smart suggestions like this. I do think it is the very best part of being married and no one thinks to tell you that. Choose wisely I say!)

Thanks to Project Gutenberg this could be accomplished with great alacrity, at the speed of a download. For those of you who have yet to be introduced to it, this is a magnificent site it is free downloadable books and stories, generally focused on early works which are out of copyright. This leads to access to many of the more obscure and hard to find works of early authors which would be prohibitively expense to purchase to read, even if you could find them. I read many of Edna Ferber’s short stories from these downloads.

While in general I might say I prefer to read with a book in my hand, about half my reading is done with these downloads these days. (To be fair, another swath is audio books I listen to at the gym – much contemporary fiction is consumed that way.) A great advantage is that I can pull out my phone and read a bit while on line somewhere or on the subway – it is always with me. My Frances Hodgson Burnett mania has been hell on my reading of the New York Times lately, but the news isn’t all that great these days anyways. And as a result I have had a more contented summer commute than most during horrendous subway delays and waits.

Born in England in 1850, she evidently always wrote, even as a child. Her own financial fortunes seemed to wax and wane dramatically from childhood through adulthood much like the story lines of her fiction. Born into affluence her father dies when she is young and the family slowly spirals into poverty which ultimately forces a move to Tennessee to live with an uncle, who in turn becomes impoverished. Burnett begins publishing magazine stories to some success when she is 18, in order to help support her family and she quickly becomes a writing and publishing machine. She eventually marries and has two sons. She is living in Washington with her family when in 1879, on a visit to Boston, she meets Louisa May Alcott and Mary Mapes Dodge, editor of St. Nicholas magazine, and that is when she starts to write children’s fiction. This is of course where her fame will live on.

Meanwhile, an interesting aspect of Burnett’s adult fiction for me is she is another entrant in a long line of women who write about the then modern woman of the day. Pictorama readers may remember my posts about the serial books Grace Harlowe and The Automobile Girls and The Moving Picture Girls (which can be read here) as well as my more recent one, mentioned above, about Edna Ferber, Fervent for Ferber (you can find it here).

In my mind there is a fascinating timeline that can be drawn from, let’s say, Louisa May Alcott (1832-1888) and her world of women which by necessity revolved mostly around caring for men and their families, to Burnett – women’s fortunes were still largely dependent on men and marriage, but there is an increasing sense of independence and control of their own destiny. The more independent American woman is frequently brought into contrast with her European (generally British) counterparts, causing all sorts of consternation. After Burnett the truly modern woman slowly emerges – driving cars, working for a living, controlling her own financial destiny – ultimately Edna Ferber’s women sit firmly astride both worlds, working, running businesses and finding their own success. I do hope Burnett and Ferber had a chance to meet, and I am glad Hodgson Burnett lives long enough to have a peek at that world for women. In another universe I believe I am writing a PhD thesis on this.

Even when Hodgson Burnett is writing about men, she is writing about women. I will expand on this theory when I return to this topic and write a bit more about some of the books. For though now I think I have chattered on enough for one Sunday!