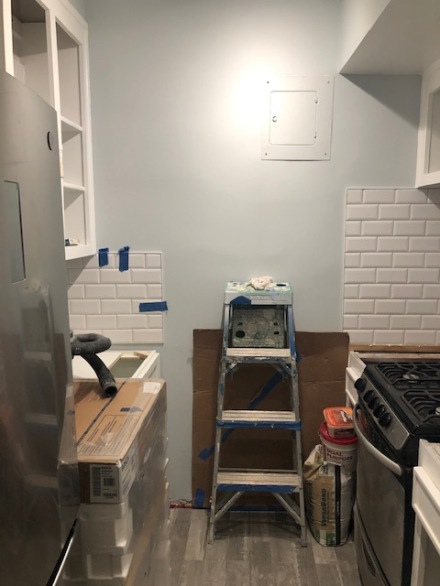 Pam’s Pictorama Post: As we remain packed (and dusty) during our renovation stint I find myself reluctant to go digging among my collections so today I am reflecting on that which I have recently packed up in the process. Life in our apartment is about maintaining status quo right now, with hopes of all returning to its rightful place in about ten days. The process of packing up was by necessity much quicker than I would have liked (tucked in after the window replacement packing and unpacking a few days prior) and unfortunately the thinning out of unnecessary items will have to occur on the unpacking side.

As I have opined – it is a very small kitchen and in general a compact, tiny really, apartment. Having said that I was amazed by how much I had managed to store in the kitchen cabinets. Like a clown car at the circus, it just kept coming and filling more (and yet more) boxes. I had honestly thought I could pack the kitchen in two hours and instead found myself searching frantically for additional boxes and packing well into the night. Boxes were piled higher and claimed more space in the living room until there was only a path through it.

What I found interesting was that in some ways it was like excavating through the layers of my life back to my much younger self, setting up my first apartment in New York City. As I measure the reality of my life against the sort of adult existence I imagined for myself, the difference can be divined through dishes rarely or never used.

I was launched from my home in New Jersey with access to generations of dishes and a certain wonderful excess of antique furniture. (As a result I have a truly unusual number of antique rocking chairs in a very small space, but we’ll discuss my family’s mania for chairs another time.) As I packed up wine decanters and covered serving dishes well into that evening I realized I had envisioned a life where I would entertain more, one where I would actually cook. I was unable to peer into a future where at most we would grab some pizza or take-out from the Mexican place across the street (run by a Korean family which makes for not quite authentic, but perfectly satisfying cuisine), move some piles of books and call it a meal.

In addition to the aforementioned decanters and covered dishes, I am in possession of a full set of sterling silver – I think it is service for at least eight. I had tucked away serving bowls, luncheon plates and some fairly esoteric baking devices such as a gram scale, which had not seen the light of day in decades. I will certainly send much of this on its way to a thrift store in hopes that it finds a home where it is trotted out and used more frequently and I am touched in some ways with gratitude that I was launched into adulthood with such largess. Nonetheless, I am also confronted with a ghost memory of a younger me, imaging a different sort of future where I would cook and bake and have a need for serving dishes. One that has never really reached fruition.

It isn’t like I have never cooked for friends, although admittedly it has not happened in recent years. I am a good cook – professionally trained as I thought that was how I would make my living at one time. It is a muscle I rarely exercise beyond weekend meals for Kim and I however and those more about dietary exactitude and convenience than creative cooking endeavors. (However, Pictorama readers might remember when I was seized with a desire for my grandmother’s poor man’s cake over the holidays last year and I recreated it with the help of the internet. I posted about it here. Incidentally I found the Pyrex baking dishes I knew I owned and could not find and which I ultimately replaced with a purchase from ebay.)

In part it isn’t just me but the world that has changed and I dare say there aren’t many people in New York apartments who are making much use of decanters or cake plates these days, even in larger abodes. Perhaps it happens in the houses in other parts of the country where HDTV home renovation television thrives – but even there the days of formal dining rooms seem to have faded away.

The question remains, how much of this will I keep out of a sense of nostalgia and perhaps promise. By this I mean, will our entirely new kitchen mean a renaissance of baking and cooking? It seems unlikely given my current job and priorities. Still, with the holidays on the horizon there is an itch for another poor man’s cake and perhaps even some of my grandmother’s spice cookies if I can locate the recipe.