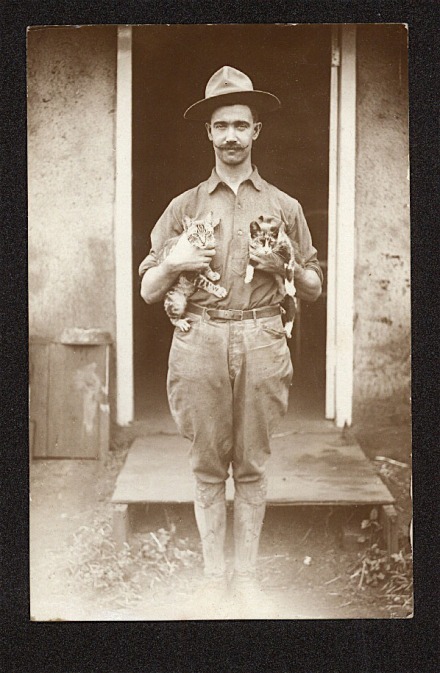 Pam’s Pictorama Photo Post: I don’t believe that I have ever before been compelled to copy out the eBay listing for an item wholesale, but this one was quite interesting and contains information that is nowhere to be found on this card:

Original RPPC photo of a trooper of I Troop, 4th Cavalry holding two cats at Schofield Barracks, Hawaii, circa 1913-1915.

From the archives of the World War History & Art Museum (WWHAM) in Alliance, Ohio. WWHAM designs and delivers WWI and WWII exhibits to other rmuseums. Our traveling exhibits include Brushes With War, a world class collection of 325 original paintings and drawings by soldiers of WWI, and Iron Fist, an HO scale model of the German 2nd Panzer Division in 1944 with 4,000 vehicles and 15,000 men.

So it seems to be part of a de-accessioning for the above museum and of course, I love it because it fits so nicely into a Men and Cats theme which runs loosely through my blog! (These include but are not limited to: A Man and His Cat, Men and Cats, and Men in Hats with Cats.)

Somehow one doesn’t really think about Hawaii in WWI (as opposed to the big role it got in WWII), but of course the war was there too. I wonder what this long-ago Pennsylvania boy thought of Hawaii? Surely the army in Hawaii must have offered some advantages over the mines of Pennsylvania, although home is home and he was very far away. France followed Hawaii for him. I am glad we know he made it through and settled in Ohio – maybe keeping cats there and thinking of his army kits. These are two great scrappy kitties, barely out of kittenhood, but ready to take on the world. A striper and a tuxedo – tops in my book! Give them the enemy, Germans or mice, and let them at ’em!