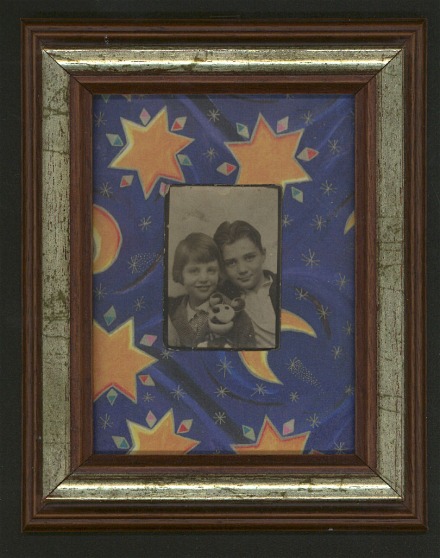 Pam’s Pictorama Photo Post: I have said it before and I will say it again – I am a very lucky girl! This great photo booth picture was a gift from my bro’ in-law, Seth Deitch. He posted it on Facebook a while back and seeing my enthusiasm, framed it up in this fantastic setting and sent it off to me where it sat under my proverbial (only) Christmas tree, waiting for me. Yay! I was hopping up and down when I opened it up.

In an odd way this photo immediately reminded me of one already in my collection, below.

Kim has done wonders lightening this tintype a bit. It is in rough shape and dark in the way that poorly developed tintypes are – the fixative never full set or rinsed. Nevertheless, it was so strange and interesting I purchased it. It is like a photo of a kid from another, somewhat but not quite similar planet rather than just the past. I believe it is European. The little boy is dressed like the archetype of a wealthy child from a certain period – short pants, but expensive coat and clothes in general, the beret at a jaunty angle, carefully placed. In addition to the faux Mickey I love the bear wearing the nice straw boater.

By contrast the kids on the top photo are wonderfully brash and look like they probably wandered into this photo booth at Coney Island or some place like it. The big brother, who would give his sister a hard time often, but on this occasion was the one to whip out the needed quarters to have this snap taken, his arm casually thrown over her shoulder. How lucky that she has her Mickey with her. They aren’t clearly wealthy like this earlier kid, but man, they’ve got the world on a string, they do.