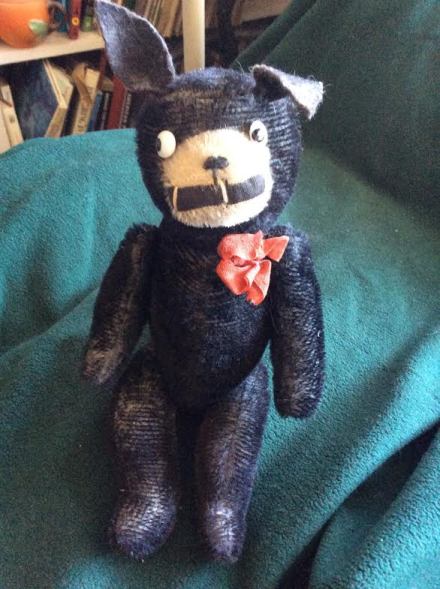 Pam’s Pictorama Toy Post: The toy posts continue, as does the work in our compact apartment; I write to you from a very dusty computer this morning. I snapped a few quick photos of toys as I cleaned them and packed them for the duration of the ceiling work. Last week I featured Felix-es that could use some work in my post, Felix…the Bad and the Ugly, and it reminded me of a toy hospital that used to reside on Lexington Avenue, near Bloomingdales. I worked in the neighborhood, my brief stint at the Central Park Conservancy, and was of course curious. As you walked by you could see toys piled up in a second story bay window in a old building – a large sign declaring Toy Hospital. Therefore one day, when to my great horror, the arms broke off this Felix I knew exactly where I was headed.

On my lunch hour I chugged up a couple of flights of old, steep stairs in one of those incredibly narrow, dark stairwells you find in very old New York City walk-up buildings of a certain vintage. A glass door opened into a room which pretty much had toys scattered and piled helter-skelter, waist high with no visible path through them to the window. The shop ran the length of the floor, with about a third off it closed off as what appeared to be a workshop at one end. The toys strewn around were not of any particular vintage – all in various states of repair and disrepair. I did not see other antique Felix dolls.

An elderly man greeted me and I showed him the patient. Felix is held together by a wire armature – his arms and legs are meant to move. The armature was so very old, and rusty, that it had broken. The man took Felix and told me he would have a look and he would let me know how he would proceed.

This Felix was one of my early indulgences. It was in the relatively early days of eBay (I was just congratulated on my 17th year on eBay by them – I was relieved that they didn’t show me how much I have spent in that time) and this was the first time I saw this model of Felix and I had to have him. I paid fairly dearly as a result, but had a very deep affection for his real weirdness. I believe he is a Chad Valley made toy – as is my recent Christmas gift from Kim featured in Felix as Cat written several months back. Years after purchasing him, when they had become a bit more ubiquitous on eBay, I was at a grand antique toy market in Atlantic City and saw someone selling an entire basket full of them! The El Dorado of a certain kind of Felix. She said that they were prizes at fairs in Britain. I have never really agreed with that, I believe the quality is too high and they were only purchased as toys, but more on that another time.

When I was summoned to discuss the nature of the repair, I brought Kim with me, figuring that he would appreciate the unusual nature of the enterprise. The elderly doll doc went through his plan for a meticulous rebuilding of the armature. The fee would be somewhat astronomical. I can’t remember what I suggested he might do that would be more simple – I suspect I pointed out that the arms no longer needed to move, as we don’t actually play with him much, and instead just re-attached. The toy doc looked at me and intoned, “No! I must do what is right for the doll!” Of course, in the end, I meekly agreed and Felix was restored to his original glory there. I paid more for the repair than I had for Felix, but of course it was worth it to have him back – the integrity of his moving pieces intact.

Looking back on it, I feel that the fee included the price of admission to one of those dying New York curiousities, ultimately a victim to the toy doc’s advanced age and ever-rising rents. Sadly it was gone a few years after that, a nail salon in it’s place. 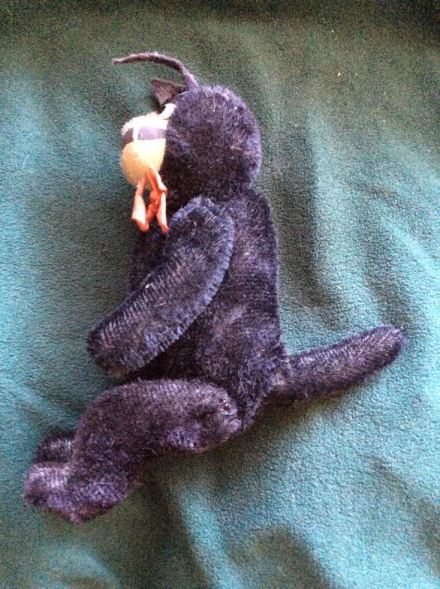 Felix from the side – note his hump back!