Pam’s Pictorama Photo Post: These came as a bundle buy on eBay and I gather they had been kept together over the years. The only objection I have to this otherwise great photo is that it is overexposed, which interferes with my ability to study some of the wonderful images a bit closer which I are itching to do. Empress is a common name for a theater (which seems a bit odd if you think about it; I mean, why?) and from a quick search I was not able to locate one with an entrance that matched this so I do not know where it was or is. I only know that this is the Empress Theatre because of a holiday card which was also included in the sale. Hearty Xmas Greetings and Good Wishes – The management of the ‘Empress Theatre’ wishes it’s ever increasing circle of patrons and friends a Merry Christmas and A Happy New Year. Unfortunately no address, nor is a year, is indicated; there is nothing on the back as this one was never mailed.

Clearly this theater was very excited about showing the William S. Hart film, Wild Bill Hickok because in addition to the poster with the lobby cards surrounding there is even an extra lobby card hanging in back – and somehow this postcard of him, below, has remained with this photo as well. William S. Hart, who rates near the very top of my list for silent film stars in Westerns, could be shown to better advantage than he is in this photo. He was a good looking guy, but could easily look like he is all nose and oddly proportioned if caught at the wrong angle.

I wasn’t a big fan of Westerns when I met Kim. I had seen one or two in passing, She Wore a Yellow Ribbon and that sort of thing, but despite an interest in early and silent film, did not count a Western among them. Kim quickly took care of that and Westerns of all sorts were daily fare pretty much from the first day we settled into life together. It took me a little while to warm up to them, but eventually the beautiful photography began to intrigue me and soon I too was a fan, especially of the early silents. I love the chance to see long vistas of untouched, wild looking countryside, horses running through them. William S. Hart was one of first I took to and I remember a glorious festival over several days devoted to him at the Museum of the Moving Image where I got a crash course under my belt over a few days. (Kim and I caught up with a few newly restored ones at the Museum of Modern Art a few months ago – they do turn up.) Below is a superior still from the film, Wild Bill Hickok (found at True West Magazine) and a nifty description of everyone in the photo. (Kim brought this one to my attention.) 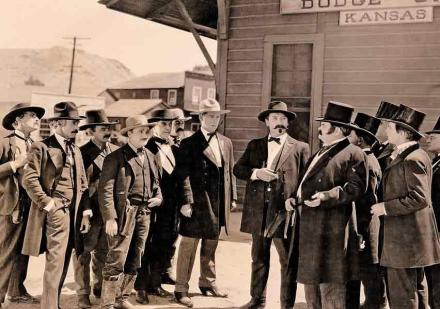 Of course, to my great joy an unidentified Felix cartoon is also playing at this theater and that is what led me to this photo in the first place. It may just be too overexposed to see the title, but I guess not. I think this was their generic Felix poster they put out whenever Felix was the cartoon that day or week.The theater team is a dapper looking group – from the woman with carefully done hair, to the bow-tie wearing gentleman, the older solid citizen who I am going to assume was the manager, and the young squirt with hair combed and a tie as well. That’s today’s tribute to festive theater going in an age past – W.S. Hart films, neatly dressed theater proprietor’s having their photo in front of their glorious entrance, and a holiday card sent to thank their patrons. Although Wild Bill Hickok is out there for viewing, it is not available online. I leave you instead with a jolly early Felix, also from 1923, which may have been shown that day – and no less, look for the cameo by our cowboy in Felix the Cat in Hollywood.