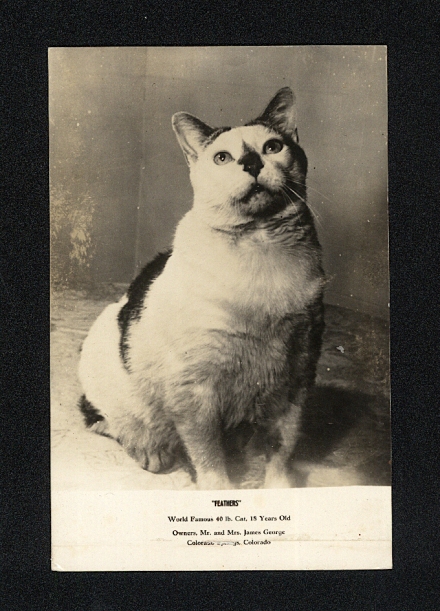 Pam’s Pictorama Photo Post: As you can see Feathers is a robust fellow and at 40 pounds an extraordinarily large one. Unlike most fat cats, Feathers seems to wear his weight handsomely and is well proportioned. I have a soft spot (so to speak) for cats with spotty noses and this further endears this guy to me. Interesting, an idle online search on Feathers turned up a fellow blogger (Another Enormous Cat with a Postcard of His Own) who owns this card, but with the added bonus that the writing on the back reveals that the people had actually visited Feathers, then 19 and up to 46 lbs. Go Feathers! Sadly, my card is postally unused without a great tale.

It is impressive that Feathers not only worked his girth up to more than 40 pounds, but also lived to a ripe old age. While my cat Zippy made it to 20 – with diabetes and other issues, and my mother has had several cats live into their 20’s – one would think that the size of the cat would have shortened his lifespan. (I can’t imagine the lecture one would get from a vet today.) Somehow Feathers managed to figure out how to have his cake and eat it too! One wonders if he was already rotund as a kitten as we will assume he was given his moniker of Feathers at a young age.

Longevity among cats seems to be on the rise and it now seems unusual if a cat doesn’t live into its late teens at least. Kim has pointed out that cat life was cheaper when he was young and that it is amazing how much longer they are living in these days of premium cat foods and vet visits. Cookie and Blackie are on what he calls the 20 year plan which includes a rather precise diet as prescribed by our vet who insisted that these kits take a few pounds off. (We are not even allow to speak the words cat treats to these kits.) Cookie in particular curses that day (and the vet) and she is clearly of the opinion that she would rather live well than long, but she does not really get a say in the matter.

I did search, but could not find articles relating to Feathers and his Colorado Springs family, Mr. and Mrs. James George; although clearly, given the evidence of the professional postcard and the family from another state having visited, word about Feathers must have spread via some form of media at the time. However, Feathers is not forgotten and we celebrate his evident long life as well as his place in the pantheon of cats as a very portly puss.