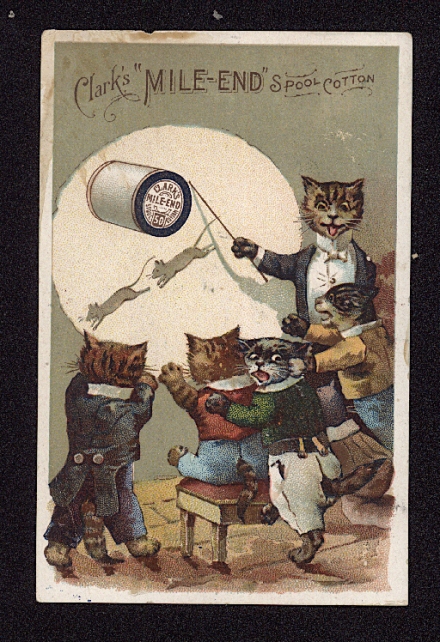 Pam’s Pictorama: Okay, admittedly, I have proven that I have a soft spot for this kind of advertising cards. I recently wrote about advertising from another thread company, J&P Coats, in my post By a Thread. (This company, Clark’s Mile-End Spool Cotton predates J&P Coats by a bit.) That one examined the early thread industry a bit, as well as bemoaning the lack of notion stores today. The card featured in that post featured a cheeky bunch of kits teasing an angry dog, held by thread.

This card takes the Louis Wain-esque approach to advertising with these rambunctious kittens being taught a somewhat mysterious lesson in rats and threads – which the kittens seem to enjoy. (I like the way the trousers were drawn to allow for fluffy cat tails to hang out.) These fellows, and they are all boy kitties, are ready to go after those rats! Are they going to use thread to do it? The rats jumped over the thread on the moon and the little dog laughed? I’m not sure. If it did have a meaning it is lost on me – love the image though.

Evidently from the heyday of Victorian trade cards, this card would actually predate Wain’s success (his first drawings were published in 1886), or at best overlap with his first years of publication – therefore perhaps it is this tradition he came out of rather than the other way around and someone riffing on him. Cats having long provided fodder for the trade card business. By way of reminder and comparison, I stole this great Wain image below off the internet – I have not entered into the high flying world of Louis Wain cards – yet! 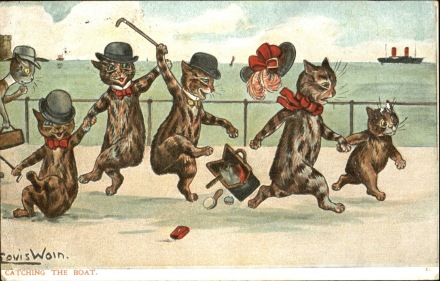 Louis Wain Postcard, not in my collection

One thought on “Kitten Class”