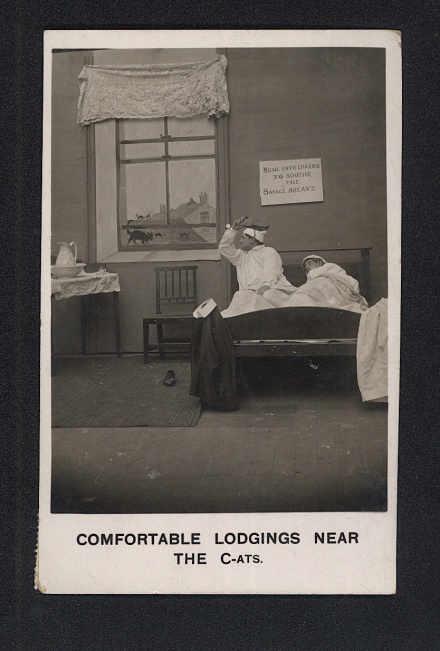 Pam’s Pictorama Photo Post: While I am mostly known about the house as a rather superb sleeper (Kim says if it was a competitive event I would medal, maybe even take gold) recently I have been having some insomnia which for me takes the form of wakefulness from the hours of approximately 2:30-4:00 each night. However, unlike the gentlemen in this photo, I can’t blame it on the kitties. Generally speaking, I find them snoring gently at my feet when I wake. I occasionally nudge Blackie awake to have a conversation and some pets – I figure that keeping me company is one of their cat jobs. I guess he regrets not reading the fine print on his cat contract as he is usually anxious to get back to his Zzzz’s.

I had to look closely to find the black cats perched on and out the window in this odd scenario. I am not sure why the sign over the bed reads, Music hath charms to soothe the savage beast – referring perhaps to the kitty accompaniment responsible for their wakefulness? This reminds me of one of my favorite purchases and posts in recent years to be found at Kitty Sextette Singers – a kitty orchestra on a fence with a doggie audience. Noisy cats on a back fence make up an almost infinite string of cat cartoons, from Felix to Terry Tunes.

This photo postcard seems to belong to a bizarre sub-strata which I have tapped into lately of strange photo cards. It reminds me a bit of the recent photo and post Cat of the Sea? in that it appears to come from something other than just the origin of postcard photo. This one looks like it might be a still from a silent film, although that seems unlikely really. Perhaps a series of cards?

This card was mailed and has a postmark date of October 21, 1918. It appears to have been mailed in Scotland to Miss Smith, Seabourne, Broughty Ferry, Scotland. The pencil scrawled message on the back is a bit inane and what I can make out reads, Just a PC to let you know that I got your let allright (sic) Well I have not got a chance to write you but don’t send any word here till I write you as I am going to leave here and will send a PC at the end of the week. This is followed by a sign off and signature which goes over the message and is utterly illegible. All this to say, got your card, don’t write me – I’ll write you. Funny how rarely people write with pencil now, pens are so ubiquitously available, but they weren’t then. I am here to tell you that a message written with a blunt-tipped pencil more than 100 years ago is generally hard to read!

I have rarely, if ever, experienced first hand the kind of caterwauling this card pokes fun at – thankfully the stray cat population has been successfully reduced in a number of ways, at least in the places I have lived. However, just before I go to sleep most nights, Cookie and Blackie have a tear around our one room apartment, which generally ends in a fight and me yelling for Blackie to stop killing Cookie – right now! And then Blackie, feelings hurt and all wound up, goes and meows at the door to the apartment in a dejected fashion. I guess we have our own version of a late night kitty concerto.