Pam’s Pictorama Photo Post: Okay, I certainly understand that this may be a photo that called only to the likes of me. Tiny cat and dog toys, posed with a sort of a Kewpie-esque baby doll, on this stone bench or arcade in a sylvan landscape, complete with classic brick university buildings in the background. This photo, of interest to me for the toy factor, was taken from a photo album belonging to Helen A. Brouwer, Ohio University, Athens, class of ’29. According to the eBay seller, this photo is from 1928; it is unmarked in any way, but I gather it was dated in the album it came from.

Helen, shown below, was born on February 28, 1907, (making her a fellow Aquarian), and resided at 1316 Shelby Street, Sandusky, Ohio. She evidently majored in Phys Ed and became an instructor and coach before life eventually shifted her over to physical therapy later. 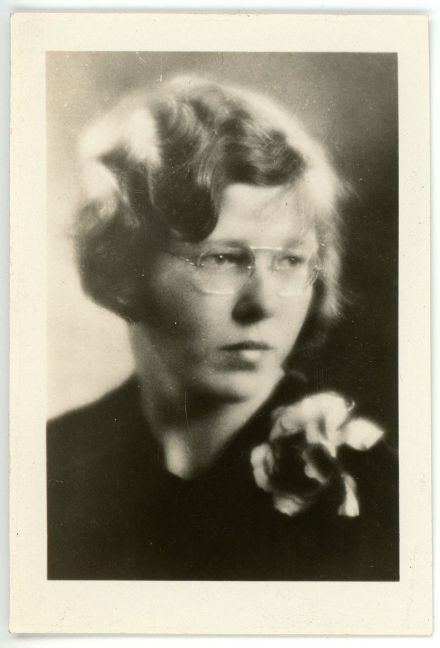 Our stuffed animal friends are evidently posing in front of Lindley Hall. This is a tiny photo, 2.5″ x 3.5″, poorly recorded. There is another photo of a friend, probably a sorority sister, below holding, I think, the dog toy. Without knowing for sure, I assume these stuffed animals were beloved mascots of the sorority, recorded here for posterity. I like that cat toy and wouldn’t mind adding him to my collection. The dog is a nice match for him, and I like to think I would have gravitated to a sorority that held these toys in high esteem. The photos and bones of the story as sorted out from the album and subsequent listing on eBay appealed to the part of me that likes reading young adult novels from the first part of the twentieth century – such as The Automobile Girls, Grace Harlowe and The Moving Picture Girls (my post about them can be found here), but a real life version of a first generation for many, of women at college. Some silliness such as sororities and mascots, but of course, really the early foundation for a first educated and independent female workforce. 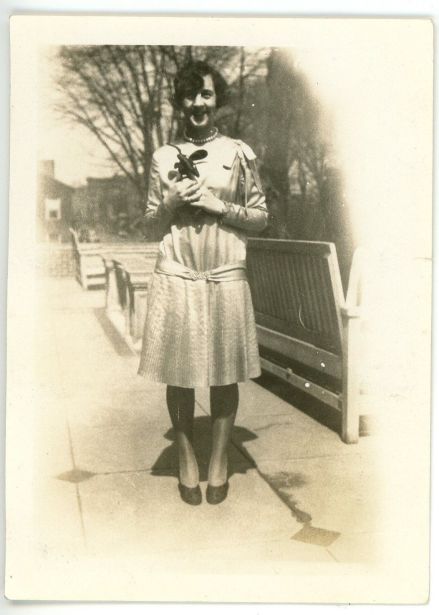 Woman holding the mascots in front of Lindley Hall, photo not in Pams-Pictorama.com collection.