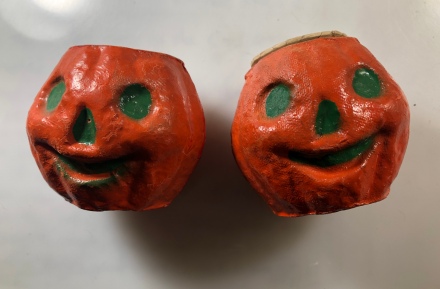 Pam’s Pictorama Post: A happy Halloween to all! I am wrapping up my series of seasonal posts with a final nod to Halloween today. These tiny jack-o-lantern style candy cups are paper mache and may have sported handles and paper inserts – one still contains an insert. I assume they would have been filled with candy corn and the like, although frankly I am a bit unsure precisely what small candies would have been offered when these might have been new.

These candy containers are miniatures of the larger ones kids carried to collect candy in. Like my cat version below, they would have paper inserts for eyes. (A post about that acquisition can be found here.) Until recently I thought these were meant solely for decoration, but recently I have seen period photos of kids carrying them for candy filling purposes.

I have long desired possession of some of these Halloween wonders for my own and I have not yet gotten my hands on a large pumpkin to complete my collection. I would happily accept another cat if it had the right expression – twist my arm, you know?

My introduction to these paper mache decorations was a shop in Cold Spring, New York. A couple of hours from Manhattan on a Metro-North train will deliver you to the heart of this lovely little town on the Hudson. I used to make the pilgrimage each fall to look at the changing leaves along the river on the train north and then spend the day wandering around antique shops. One store had an amazing collection of these early Halloween decorations, all being sold for much more money than I could hope to amass at the time. It whetted my desire for them however and it is only getting sated now – this opportunity provided by my new provider in the middle of the country and due to a certain amount of internet trolling I did not previously indulge in.

Meanwhile, when I consider candy from this period I am going to guess that a fair amount of it was probably still homemade when these pumpkins were new, perhaps in the 1920’s. I just finished reading a book from 1915, Miss Pat and Her Sisters, where the author Pemberton Ginther indulges in a lengthy description of homemade candy preparation. Although I understand that somehow it was brightly colored and lots of sugar was involved I really know no more than I did when I started and don’t see it in my mind’s eye at all. Did it look like homemade Necco Wafers?

While I have certain bone fides in the kitchen and can hold my own in the world of soups, pastas, stews and even baking to some degree, candy has long failed me. (Some of my cooking related posts, cheesy olive bread and a one-bowl chocolate cake can be found here and here.) My childhood reading of early juvenile novels (which Pictorama readers know continues today) inspired me with fantasies about homemade candy making, at least pulling taffy or making fudge. However, it was a miserable failure each and every time we attempted it.

My sister Loren was usually a part of these culinary explorations which is notable because after a certain age we didn’t indulge in a lot of mutual activities. Loren ultimately became a good cook in her own right – leaning towards success with breads, another area I have not achieved too highly in – but she could get a bit experimental and was known to throw random ingredients in if you didn’t keep an eye on her – but it wasn’t her fault we failed. Our fudge, regardless of recipe, never hardened and our taffy was a sticky monstrous disaster. (May I add, candy thermometers have always seemed extremely exotic – coated in sticky, hot sugar on the stove. Why doesn’t the heat make them explode? I have always wanted to own one but I suspect it would be disappointing.)

In retrospect, I assume there are some tricks to pulling taffy we just didn’t have in our repertoire, but I will never understand where we consistently went wrong with fudge. It is my understanding that fudge should be easy – children should be able to make fudge. After multiple attempts over a long period of time we gave up on it. To this day I cannot eat fudge without duly noting our failure, tugging at a corner of my mind though.

Like many American children of the mid-twentieth century, my imagination was kindled by the concept of Turkish Delight in the C.S. Lewis book, The Lion, the Witch and the Wardrobe. Perhaps this candy was well-known by the British children of a previous generation, but I have to admit this kid from New Jersey was well into adulthood before coming across Turkish Delight in person. It turns out that I like it, although admittedly it was never good enough that I imagined being inspired by it to sell my siblings into witch-dominated servitude. (However, it goes without saying that sometimes just living with siblings would have you ship them off without so much as a Mary Jane in exchange.)

I believe I was actually in London the first time I had Turkish Delight, although I think that was just by chance as I have subsequently had it here on many occasions. A plate of it came with bitter black coffee at the end of an excellent meal in a Greek restaurant. I also remember that my friend Don turned my cup over when I was done, sludgy grounds sliding onto the saucer, and then proceeded to read my future from the designs made by the grounds on the inside the cup. That was a first too – maybe the only time I have had my coffee grounds read. Anyway, Turkish Delight was the rare candy event that successfully survived the leap from the literary world to the real one.

Meanwhile, a quick search reminds me that licorice was popular at the beginning of the 20th century. (Mom and Loren were fans, I never was and would eat the red version only, if pressed. If Dad and Edward had a preference I cannot recall it. Ed?) In the day when these pumpkin containers would have been stuffed, candy corn was indeed already around, as were Tootsie Rolls and Hershey’s chocolate.

On the more homemade side there were sugarplums (also called cream filberts and later, yikes, were known as mothballs – um, talk about a fall from grace), potato candy (a homemade Depression era treat made with potatoes and peanut butter – really?), and my favorite, toffee. (I opine a bit on the delights of toffee when celebrating the purchase of this Felix toffee container below. Read that post here.)

Strangely it turns out that candy cigarettes have been around since the late 1800’s. I was fascinated by them as a kid and only ever saw them if they turned up in my Halloween haul. As I remember them, in addition to chocolate ones, there were ones made with white sugar and those came in lovely red and blue plastic “cases” – the candy cigs had little bright pink ends like you were smoking with lipstick on – who can make things like that up?