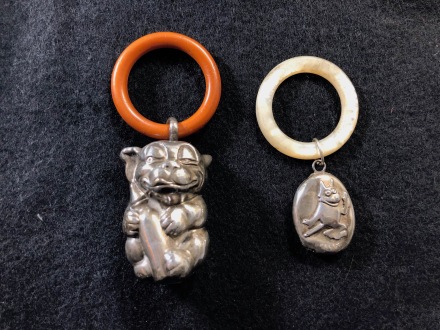 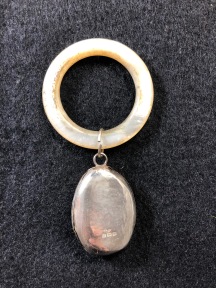 Pam’s Pictorama Toy Post: Ah yes, a New Year and Pictorama is back to the toys. Christmas came late this year at Deitch Studio and these two splendid entries found their way from Belgium just before we rang in the New Year. Forget spoons, oh to be the youngster born with these silver rattles in their mouths!

I have bid on Felix rattles once or twice before and have always been bested so I leapt at the chance to purchase this hotsy-totsy one. Those of you who follow my ramblings know I have a special soft spot for off-model, primitive Felix-es like the one employed here. The rattle is marked sterling and I have shined him up a bit to have his photo taken although he is somewhat fragile. There is evidence of some dents that suggest gummy gnawing, although not really any deep dents. He is in an interesting semi-profile pose. (I was given a pocket watch that was my great-grandfather’s a few months ago. I took it to the jeweler to have a chain made so I could wear it that way, and he pointed out a dent where someone had bitten it. He said it was very common to see in gold pocket watches. I gather people would sort of mindlessly chomp on them. I have been puzzling over that adult form of teething ever since.)

The mother of pearl ring is very beautiful. Extremely elegant! If it wasn’t so fragile I would be tempted to wear it as a necklace. It does still rattle as well, a fairly quiet sound, although perhaps a bit noisy for a necklace now that I think about it that way.

The deal was already struck on Felix when the dealer, someone I have now known for a number of years, sent the photo of Bonzo and asked if I would be interested in him as well. Of course I was. After a short conference with Santa in the form or Mr. Deitch, we snatched him up too. Although the rings are more or less the same size, Bonzo is much bigger than Felix and a robust three dimensional rendition. Sleepy Bonzo clutches a baby bottle (you’d never see Felix with one of those I don’t think – not with milk in it anyway) and he has a rattle that is much more like a tinkling bell. (When I took him out of the package Cookie’s eyes lit up at the sound. She was clearly thinking that a lovely antique silver cat toy had just been delivered for her delectation and her attention needed to be directed elsewhere.) Bonzo’s eyes are just barely open, and if you look carefully, his lip is curled in a smile on one side. 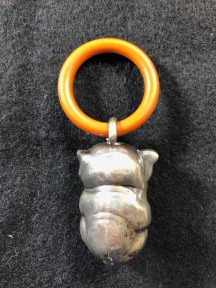 Bonzo is less fragile than Felix and really could perhaps even resume his duties as the recipient of child chewing, although we will not test that theory. (Nor will we let Cookie take possession of him.) He is not marked sterling so I will assume he is plate – although he shined up nicely as well, the plate in good condition – after all, how much time did anyone devote to keeping their child’s rattle polished I wonder? A quick internet search shows that the Bonzo rattle is the more available. Although as I say above I have seen Felix rattles, none turn up immediately in a Google search.

I have never purchased a silver rattle as a baby gift, although price notwithstanding, now that I think of it a silver rattle like these is a rather wonderful gift. A quick check informs me that Tiffany is not offering a silver rattle this season – let alone one of Felix or Bonzo. However, the Tiffany bear below appears to be of recent vintage and can be yours on the Tradesy site for prices ranging from a mere $250-$650. I think I will stick with copies of The Story About Ping and The Cricket in Times Square (posts of those favorite childhood books can be found here and here) as my go to baby gift, but I must say the Tiffany bear is a very fair offspring to Felix and especially Bonzo. For those of you with deeper pockets and a generous nature, you might consider such an investment in the future of a baby you know. 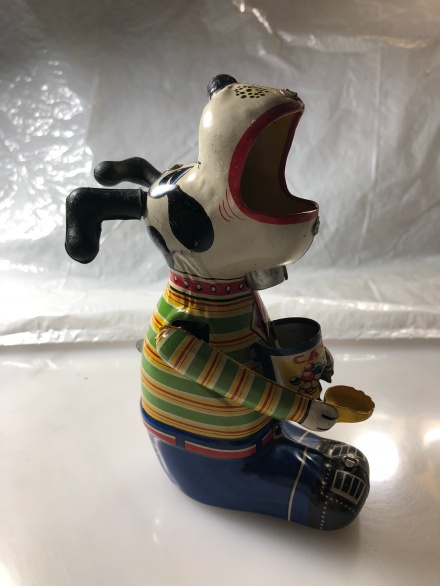 Pam’s Pictorama Toy Post:  Last week I wrote about the thrill of a new celluloid toy purchase. (In It for the Toys: Part 1 can be found here in case you weren’t paying attention last week.) I bemoaned the fact that the toy is no longer functional. Long before stuffed Felix the cat dolls were a twinkle in my eye, my adult fascination with toys began with a small number of antique toys, wind up and battery operated, some that just make me laugh with sheer joy! Why wouldn’t you want to own that? It remains a mystery to me why anyone today would sell a wind-up toy without showing its movement – for me it is almost always the movement that will sell it.

I believe was in fact looking for a toy that would cheer when I stumbled across this little fellow on eBay and he fit the bill. Complete with his box he was a bargain; he isn’t especially rare although admittedly finding him complete with his candy, essential to the effect really, is a bit harder and you really do need the candy. The video he was sold with had loud annoying music, but nevertheless did the trick. While well preserved with his box, he does not appear to be new old stock. There are small signs of use and the balls that are the candy are not in their original wrapper. I am pleased to say he was fairly easily acquired, and does not disappoint.

The mechanism is very straightforward, much like a cycle in animation, he endlessly tosses “candy” in his mouth which falls out the bottom, through the can and back into position to be tossed again. Splendid! To seem him in action in a brief snippet I filmed you can go here. 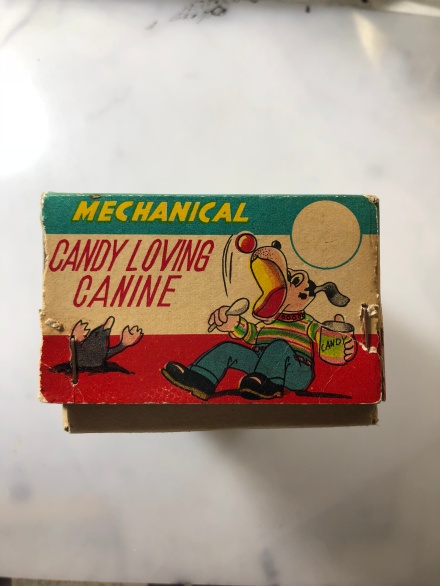 As always, the box offers additional charm, the text on the front Mechanical Candy Loving Canine, ALWAYS HUNGRY NEVER SATISFIED, with a fair cartoon rendering of the dog toy with a cat and dog looking on with amazement – Gosh how much can he eat? When will he stop? And then what appears to be for all the world, a mole popping up out of the ground in the bottom right corner. The mole shown on two sides with the dog too, the other sides are instructional about the use of the toy – in case you couldn’t figure it out. This little fellow was made in Japan, as is probably to be expected of a tin toy of this era. If you believe as I do, that toys bring joy, then hopefully this little fellow brightens up your day today.