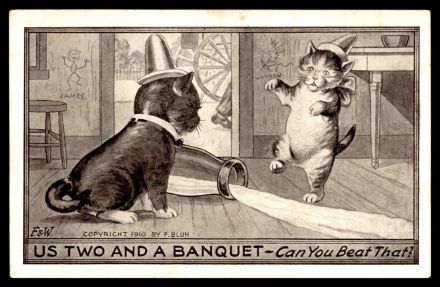 Pam’s Pictorama: This card passed the it made me laugh when I saw it test. Dancing kitties in party hats – what more can you ask for? I used to have a theory that the cats had secret soirees as soon as I left them alone in the house. In fact, the first year we were together I made Kim a valentine of he and I walking in on them in full decadent party regalia.

While they may not have been enjoying cocktails with umbrellas and putting on festive lais around their necks, I do remember discovering that my various cats and the apartment had a lives of their own while I was away at work. This started before I met Kim and when I lived alone with my first cat, Otto. The two incidents that stick in my mind occurred on days when I normally would have been at work – odd holidays I think, like Election Day which I happen to get off from work, but most people don’t. The first one doesn’t really involve the cat, but in the middle of one day while quietly reading a book, I heard someone letting themselves into my apartment! Turned out they were routine exterminators who came periodically and sprayed the place and I never knew. Seems that they also liked to look at the progress on whatever painting I was working on at the time which we then discussed for a bit. Another time, another apartment, I was home again on a weekday, Otto sitting on the window sill, and suddenly I heard a woman talking to her! And Otto (who was a girl cat) was answering her – they chirped back and forth for a several minutes. Turned out it was a woman on a higher floor who could see her on her window perch and evidently they chatted frequently.

Others have commented on this phenomena. I had a boyfriend once who, in order to see if his phone was out of order, set his tape recorder, went around the corner and called his apartment. When he played the tape he realized that each time the phone rang in the empty apartment, his cat would chirp in response – but strangely the cat never did it when he was home. Was he answering the ring? Years later, one night I awoke to a light in the other part of the apartment (we live in a studio and we sleep in a corner carved out as a bedroom so a light any place will wake me) and got up to see both cats, Otto and Zippy, sitting in front of the lit computer screen – I’d say looking a bit guilty. I’ll just say keep an eye on your credit cards folks. Such is the private lives of apartments and cats.

Our cats Cookie and Blackie enjoy a lot more human companionship than previous pets since Kim works at home, and therefore Deitch studio is in rollicking full tilt most of the time. In fact the kits seem a bit incensed if he and I go out for any length of time and leave them alone. I believe they feel we are here for their ongoing entertainment. So whatever hijinks they do get up to on their own – gin fueled cards games and smoking hookah pipes, wearing party gear, must occur instead late in the dark of the night while the human denizens of the apartment are sound asleep.