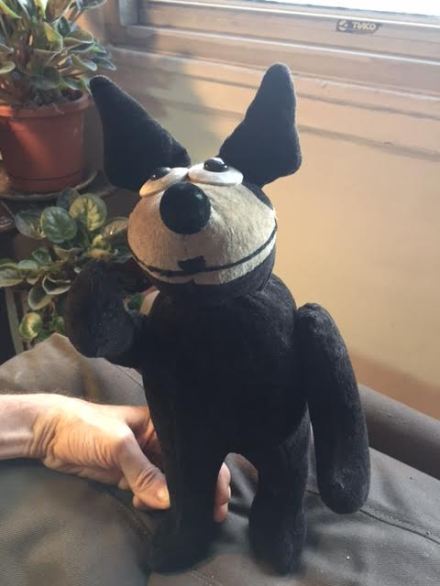 Pam’s Pictorama Toy Post: Yep, Happy Birthday to me once again – and get a look at this glorious new toy for the Pictorama collection! This fellow, known as a Yes/No Felix made the trip across the ocean from my friend a toy source (my supplier, shall we say?) named Regine who lives in Belgium. She had this fellow up on eBay a few months back, pre-Christmas. I hesitated on him as he no longer has his Yes/No function – you moved something (tail? arms) and he nodded his head yes or shook it no. This one appears to remain mute. I reached out to a friend and collector to ask his opinion about purchasing a toy that had lost this original functionality. His answer made me laugh – he said that to his knowledge he had perhaps used the yes/no on his Felix immediately upon purchase and to his memory never in all the subsequent years. He did however, ask said Felix if I should purchase the toy and his Felix said Yes! Luckily Regine still had him and so I acquired him, for my birthday – or to be more accurate my very generous husband the ever-wonderful Kim Deitch bought him for me and Regine got him here in record time.

Felix turned out to be larger than I anticipated (always a happy discovery) and a great specimen of Felix toy really. I love his comical tummy bulging shape, googly eyes and his large, goofy ears! More than the other toys (all ranging pretty far from the cartoon design to be honest) he is like Felix’s elder statesman uncle – the one who pulls silver dollars from behind your ear. While he is a completely different design from all the toys by other makers, he is similar to another Felix by the same maker, Schuco. That one that originally wound up and walked and was produced later than the Yes/No. (Mine no longer walks either, perhaps there was something about the mechanisms on these Schuco toys? He is a long story of his own which we may or may not get to one of these days here at Pictorama.)

Below is our man as a Christmas gift in his youth. Regular readers will remember this from just a few months ago posted in A Very Felix Christmas – and to think I had no idea at the time that this Yes/No fellow would be coming to live here!

Let’s turn back the clock a bit. In the beginning of collecting, shortly after my first toy cat purchases – several splendid stuffed cats from the early part of the 20th century which were unearthed at antique stores in Red Bank, New Jersey – I discovered Felix the Cat toys with my first purchase of one at a flea market in London. I was off and running! Yet it was quite a while before I knew anything about them or who made these Felix toys. For some reason I thought that Germany was a likely maker of the European version of these American cartoon toys – or perhaps France?

It was a number of years before I discovered that the majority of my beloved Felix-es were made in Great Britain. I have examined this in different ways in a number of earlier posts including Felix as Cat and most definitely East London Toy Company, one which I myself refer back to periodically. The British were a hotbed of Felix production, companies such as Dean’s Rag Company and others. They far outstrip Felix’s home turf of the USA where he seems to have been somewhat neglected on that front despite his extraordinary film fame.

Anyway, all this to say that I ultimately learned that outside of Britain the production of Felix toys, particularly stuffed ones, was pretty much limited to a few models of Steiff on the US front and Schuco in Germany, and I have sited the two stuffed Schuco Felix toys above. Schuco was founded in Germany in the year 1912 and seems to be primarily a maker of rather indestructible looking metal cars and trucks. Odd that they should make Felix toys with a tendency toward mechanical breakdown. However, I have a lovely little Schuco bird which still functions – for this one see the post Tweet, Tweet, Tweet.

So thank you Kim! Thank you Mel for your advice (Felix’s too) and thank you Regine! You all, along with Felix, have softened the blow of growing one year older.