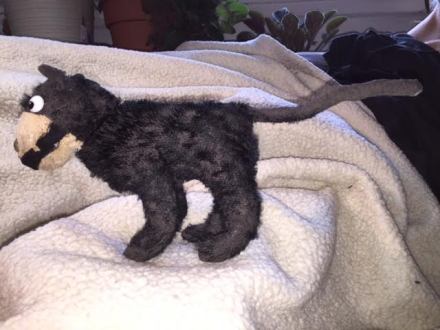 Pam’s Pictorama Toy Post: Oh Merry Christmas to me! This extraordinary Felix was a gift from Kim this Christmas. In truth, I picked him out on eBay months ago and Kim purchased him and tucked him away. Christmas morning was my first good look at him though – and wowza!

I have only ever seen one or two Felix dolls posed on all fours, but never this model. Felix walking (upright) was part of his whole appeal – and schtick. His humpbacked thinking manner is recreated in two and three dimensions – often with the hump in his back exaggerated, as he walks, pondering something, which his hand/paws behind his back. I have a plate which bears the much used motto Felix Keep on Walking which is a play on this. (See my prior post Living the Felix Life which features this item.) As Mickey Mouse and countless others would ape later, the anthropomorphic charm is all about being upright and therefore more human.

Christmas night Kim and I stumbled home after our annual trip to my folks in NJ and curled up on the couch to take a look at another of my Christmas gifts – the superb DVD Cartoon Roots. (I know, I am a very lucky woman!) This outstandingly curated DVD put together by Tom Stathes deserves a shout out. Instead of the usual entries in the early animation stakes, this disk manages to have the one or two outstanding examples of each that you’re pretty sure you have never seen. I have not yet viewed the whole thing (why rush?) but already have seen a few excellent Terry Aesop Fables, a strange and interesting Krazy Kat (where he seems to be trying to morph into Felix…) and Felix Comes Back, a splendid example from 1922.

I have been known to opine on how Felix started out drawn more squarely (pointier I like to say) and both more feline and a tad bit doggy. According to Kim, Bill Nolan was responsible for this subtle neutering of Felix which Messmer passively allowed. Anyway, I was reminded that back in ’22 Felix spent a good portion of his time on all fours – running away fast from things most frequently – but sportier and a bit wilder.

However, all this to say, Felix spent the majority of his career walking on two legs and virtually all the toys and merchandising reflect this. In all the many hours (days, years) I have spent combing through Felix toy offerings I have, as I said above, only seen him portrayed on all fours a few times so this toy is very unusual. I originally thought of the subject of another post, East London Toy Factory due to the almost hand-made, individual aspect of this and was going to attribute that company as his maker. I lean now instead toward thinking this was made by the folks at Chad Valley. I have not devoted much time writing about the company, they appear to have been the biggest makers of stuffed Felix toys, a company that still makes some toys today. I am, however, open and raring for discussion.

For those of you who have an Amazon gift card burning a hole in your pocket post-Christmas, the DVD above can be found at: Cartoon Roots

The eBay seller who sold us Felix did not seem to know much about the origin, but she was lovely. She is Mme Regine Beghin of Belgium and this is a nod to her.

2 thoughts on “Felix as Cat”