Pam’s Pictorama: So when I left off my meandering tale yesterday, I had actually failed to acquire the featured small white plastic cat and we had not been able to visit the store in question, Obscura Antiques and Oddities, although the day ended well despite all. However, this sort of thing brings out the stubborn and compulsive side of my nature and I wanted that tiny kitty. (Meanwhile, I have to say there’s another whole piece to this story which I will share, where Kim and I have an absolutely splendid time at an antique toy shop in Chelsea. It will require several toy posts! But I seem to be committed to starting this story in the middle so I will continue on the path I have set for myself.)

Therefore, last Sunday we set our caps to right these wrongs and with Kim’s indulgence had a do-over of sorts. We started with Blick Art Supply and acquired the white plastic kitty and added the pig and a few drawing pencils on for Kim. (This time I immediately secured all in my handbag.) Then we made our way up to 13th Street and found Obscura open. 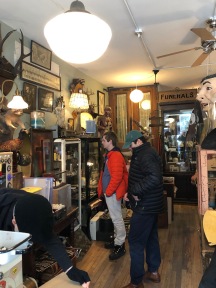 It has been about six months or more since we had paid this store a visit and I was pleased to find some new stock. The photographs I acquired relate to earlier finds at the store. This page of cat and dog photos definitely belongs to the same family album I wrote about shortly after discovering this store in my post A Page of Life (which can be found here) which was a leaf from an album created on the pages of a publication on steam boilers. This one seems to be slightly different, but if you look carefully this is also built on a page from a previous publication – a few words sneak out in the lower left corner, Show Sault Ste. Marie in its relation to Canada, East…

Whether this method of creating an album was one of thrift or an affection for the nicely bordered pages I am unsure. As this page features the gray and white family tuxedo kitty and their sprightly terrier dog, I cannot imagine I passed it up previously so it must have somehow just made its way into the filing cabinets of photos, waiting for me to come and reunite it with its sister page. Both are shown below. 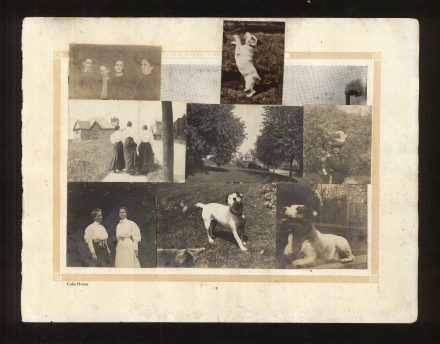 The photographer had more ambition than skill – exposures are wonky, as is printing. The glue affixing some of these to the page has further obscured the images. There is indeed a hit and miss quality to these. Still, the overall affect is endearing and tells a story and it is an interesting entry in the Victorian photo collage discussion. Notably the photographer has marked this page Rolex II in the lower left corner.

The other entry is also a bookend to an earlier post called Kodak: Box Camera (which you can find here) and I am left wondering if it is the same family and photographer or not. It is a much better – or at least much improved – photographer that made these photos. My earlier acquisition, shown second below, is a beauty of a snapshot and this new one a fair entry and also in the telltale circular image of the Kodak Box Camera. While this one lacks the great contrast of the earlier one, the new one showing a Victorian woman riding sidesaddle has a nice composition and it is a beautiful location. It is a small thing, but I am pleased to reunite these as well. 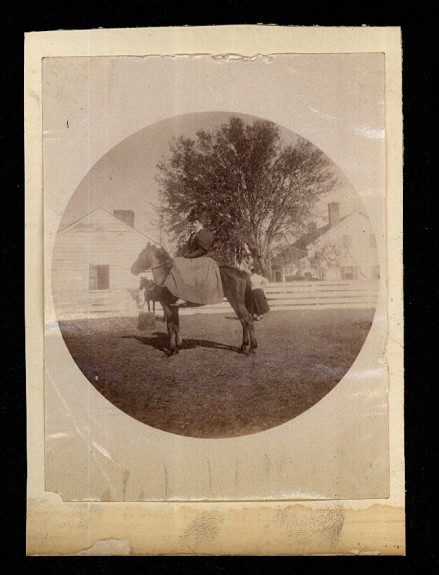 Lastly, on a whim, I purchased something unusual, this elaborate wooden photo frame. If you live in one room with most of the wall space spoken for, you generally resist such purchases, but this one just cried out to me and I capitulated. More on it when I figure out which two prized cat photos will go into the spots available – I can assure you that a photo postcard with someone posing with Felix is likely to fill the 5×7 inch spot. Hotsy totsy as I like to say!

So, with large photo frame and photos made into manageable bundles off we went in search of a place to eat during prime Sunday brunch hour in the East Village. We found long lines out the door at most of the establishments we frequent. Therefore, on a whim, we took a chance on the Ukrainian East Village Restaurant. While I had an erstwhile urge for matzoh brei which I could have satisfied at either B&H or Veselka I made do with a bowl of soup (a variation on the split pea, lentil and barley soup my paternal grandmother used to make) and another plate of potato and onion perogies. Kim dined on a substantial grilled cheese made with what can only be described as slabs of bread.

I have always been a bit curious about this establishment which has been there for as long as I can remember, tucked down an industrial looking hallway, removed from the street. It has always looked like it was some sort of a private club which coincidentally served food. It reminds me a bit of many years ago when I lived in London for a time, a friend took me to a kosher lunch outpost way out on the East End of London. This somewhat makeshift lunchroom served a huge Jewish working population in the area. It was a memorably good meal and the existence of the establishment seemed a bit miraculous. This was a bit more ordinary, but it was hot and welcome after an interesting morning of shopping out in the February cold of New York’s East Village. A nice finish to the birthday fiesta this year.