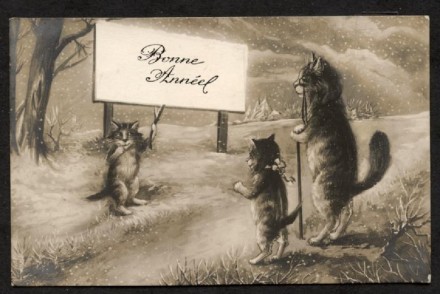 Pam’s Pictorama Post: I admit when the New York Times posed the question of if we were indeed not just starting a New Year, but perhaps a whole new decade I was a tad overwhelmed. Suddenly the teens have slipped away and we are launching ourselves into the ’20’s. How on earth did that happen? It was a busy decade – in fact it was a busy year – and it is almost hard to look at the stretch from where we started to where we ended and consider it all of a piece.

I start by sharing a New Year’s card today which I have purchased, but will not reach my mailbox until later in January. (Technically this bends if not actually breaks a Pictorama rule about having items in hand when I write about them, but we know about rules and how they are made to be broken. I claim that privilege today.) I love this somewhat ambiguous image of one cat welcoming the other two, senior and youngster into the New Year, gesturing to the road, a mysterious half-smile on his face. The scene is a snowy one, but the path is clear. The elder cat seems to be saying, “Oh yes, let’s head on into this year!” (Not sure why this is Bonne Annéel rather than Bonne Année. Please feel free to enlighten me if you know or get the reference.)

The French can be depended on for New Year’s cards and I believe the art on this postcard is by Maurice Boulanger – a French artist for whom there doesn’t seem to be much biographical information.  Boulanger’s cards were being produced as early as 1903 – or at least there are some postmarked that early according to one website I found which attempts to catalogue the several hundred cards that were produced. (The postmark on this one is obscured, shown below, addressed in this beautiful neat hand.) Working during the same time as Louis Wain and clearly influenced by him – his cats seem to belong to, if not the same universe, certainly a neighboring one of slightly more sane felines. This card is not signed by Boulanger, but certainly seems to emerge from his stable of kitties.

Highlights of this decade for me include this blog which came into existence around the halfway mark of the decade, August of 2014. In the wee hours today Pictorama hit 125 subscribed readers – thank you readers! (And a special hello to new subscriber, Ver It’s Peculiar.) I never seem to have the right moment to thank you all for signing up; please know that I am always encouraged by it. A new reader is the very most cheerful thing to discover attached to a ping! on my iPad. For those of you who have meandered around the archive you know that there are more than 600 posts, virtually every Saturday and Sunday. Many of you show up directly from Facebook, Instagram and Twitter as well and your interest is no less appreciated!

One of the most significant changes during this decade is that back in 2010 I was still working at the Metropolitan Museum, leaving the Museum wasn’t even a gleam in my eye. 2017 saw that surprising change after thirty years, when I moved to Jazz at Lincoln Center to continue fundraising but overseeing it. I write about Jazz more than I did the Met. Working at the Met after so many years was like breathing – it was hard to take a step back until after I left. They were family to me however and always will be. (My post about leaving the Met can be found here and some of my posts about my work with the Jazz at Lincoln Center Orchestra can be found here and here.) They too have become family – I find that Kim and I have been slowly absorbed into that, albeit very different, clan.

Most notably, I lost Dad in the latter part of this decade, having lost my sister Loren in the previous one. The loss of loved ones creates its own relative time – all time gets divided into before and after. (I wrote about my last days with Dad here and a bit about my sister here.) Those are the markers that live large in our mind’s eye.

Meanwhile, a look back on posts of 2019 reminds me that this year kicked off with recreating my grandmother’s Poor Man’s Cake (I’m sort of itching to make it again – perhaps it is to be a New Year’s tradition for me – yum, that post is here), covered authors Edna Ferber to my continuing obsession with the ever prolific Frances Hodgson Burnett. (Too many posts for me to list for those!) Work took me to the west coast (post here), Johannesburg (here) and most recently, Wisconsin (here). We started renovation on the apartment (too many of those posts to list as well), and best of all Kim’s book Reincarnation Stories was published in October. (Today it is on the Best Comics of 2019 list published in the New York Times Book Review. At the time I write this it can be found here.) I wrote my own two-part, very biased wifely review of Kim’s book which can be found here and here. Some posts this year were good and were well received, some less so. Thank you to those of you who continue to read regardless.

Looking forward is more important than looking back and in that vein Kim is hard at work on his next book, How to Make Comics, even as he continues to do appearances for Reincarnation Stories. I am not really a hardcore resolution maker, but it is my hope and plan to continue, and complete, the work in the apartment, fulfilling a dream of creating a wall of built-in bookcases for increased storage.

I would like to travel a little less for work, but I am not entirely sure that is an attainable goal as I already know I will be in London and Paris with the orchestra in the spring, and maybe Florida and maybe a trip back to Madison, Wisconsin also loom this winter. I would also like to take more time for myself – spend more time with Kim and my mom, get back to a more orderly exercise routine. (I have never written about how beloved my exercise routine is to me, but it definitely keeps me sane as well as fit.) This job seems to require endless time so that will be among the challenges of 2020.

So, for now, a toast of the writerly glass to you all, and my Bonne Année wishes to all for 2020. See you on the other side!

Pam’s Pictorama Photo Post: I have fallen for these European New Year’s cards before. The 2015 New Year’s installment was an array of French cards, also titled Bonne Annee, and I have owned this card for more than a year already waiting for the appropriate moment. (There was a post a French, April Fools card as well, April Fools? with goofy French cats fishing.) I purchased this card with the intention of giving it to my mother, she who is the protector of and interested in all things swan related. I promise to get it to her soon.

I am interested in the tradition of New Year’s cards. I had the extraordinary privilege of being present when John Carpenter, one of the curators at the Met, took someone through a collection of Japanese New Year’s cards and explained that at the time they were drawn, wealthy people commissioned these beautiful drawings as cards and on New Year’s Day they would go from house to house with them and present them as gifts. At each house they would be invited in for music and food. The drawings he was showing us were a recent acquisition at the time, and he hopes to do an exhibit of them. Somehow these rituals around New Year’s seem to suit me – better than freezing in Times Square I guess.

It appears the French have stuck with New Year’s cards as well – I am under the impression that they still favor them over any other form of Christmas or generic holiday card. Getting back to my card above, there is some strangeness in this image. First and most obvious, that little girl has that wicked smile on her face – is this the face of the New Year I want? I guess she is a variation on the baby New Year symbol. I have to admit that she actually looks a bit like my mother did as a kid as well. There aren’t tons of photos of her, but it does resemble the one photo I have of her at that age – minus the dangerous grin. Then there is the swan which a trick of photography has captured in between both two and three dimensional space. Stuffed swan or cut-out perhaps? It remains unclear to me. Also, I was always told that horseshoes should always go the other way so that the good luck would stay in, but I grant you, it is easier to hook on your arm this way and perhaps the French don’t subscribe to that theory. The swan can represent purity, but also strength and, clearly in this case, water – although I am not sure exactly what that says about the coming year.

When I was a kid I used to write the numbers of the outgoing year many times – thinking that I would soon miss writing it and in sympathy with the outgoing year. I have no such sympathy as I kick 2016 out and close the door on it today. Many of you were along for the ride while our apartment was torn up for months in the spring; we all suffered through the political landscape; and even the Met was plagued considerably which rocked my professional life. Saddest of all, in the closing days of the year Kim and I lost a good friend, Rich Conaty, to cancer; additionally a Met colleague, Ron Street; and heard of the illness of still another friend. We here at Pictorama and Deitch Studios are grateful to have scraped through the year of ’16 and will pull up our socks for a productive and best ever Bonne Annèe  and we wish the same for each and everyone of you!