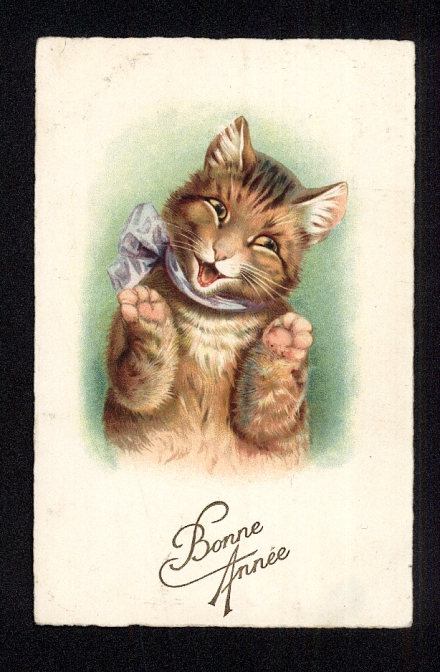 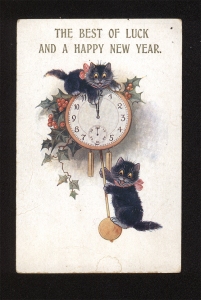 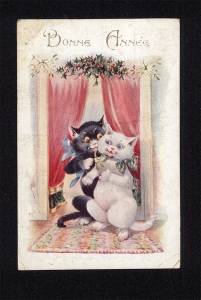 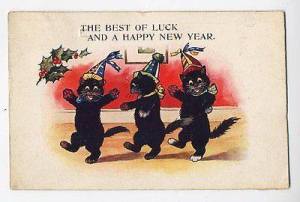 Pam’s Pictorama Post: Happy New Year! Featured here is a small clutch of New Year’s cards that I purchased last year while contemplating the then New Year ahead. The ever sensible French have a cultural preference for New Year cards over Christmas cards – thus allowing themselves more time to enjoy the holidays. I have two examples from France above and two are British. Evidently dancing black cats were all the craze for ringing in the New Year in the 20’s which is the period of these cards, ’29 (black and white cat) and ’25 (three black kitties) are the postmark dates on those that were used.

The Bonne Annee card is dated December 27, 1929 and is addressed to Mademoiselle Dora Cordova, L’rue Guy-Patini, Paris, X. The brief message, as closely as I can read it, is Meilleurs voeux et vous (?) souvenirs, Yoorssie (?) Lehmann. The other, in English, is dated 4:45 PM, December, ’25 but the day is obscured.  It says, From your Loving Sister in Law and Family with best wishes for the new year and better Luck. From Ada xxxxxx. It is addressed to Mrs. Thornton 22 St. James Street, Walthamstow.

I love the tubby black kittens – especially that party trio! But my favorite is the very mischievous brown and white fellow. He has a sort of Devil-may-care Maurice Chevalier charm about him. Quite a New Year’s bash at his house! Something makes him just short of cute. While I don’t think I am capable of tossing my habits aside and moving to New Year’s cards, I like the thought. Non-denominational well wishes for the coming year make more sense and cards arriving during the brief lull between Christmas and New Year’s or just beyond seems nice. As a small child I was always quite serious about the changeover in years – solemnly writing down resolutions, something I no longer do. Somehow I approach the whole affair with some trepidation as an adult. So, crossing my fingers and hoping for the best, here’s to 2015 to one and all!