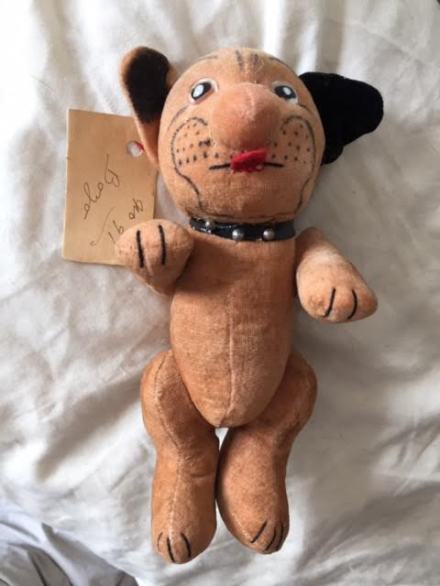 Pam’s Pictorama Toy Post: We changing direction a bit today and I present for your consideration, this newly acquired Bonzo dog toy. I found this toy on eBay, made a mistake and didn’t bid – but fortunately for me he did not sell and I purchased him from the seller. I have photographed his wonderful, handwritten tag which seems very old as well. As far as I can tell it say, Bonzo and no 91 on one side and on the other Viola & Madeline Falkenthal 210-08 93rd Ave Bellaire Gardens, Cullens, Long Island. There is an online record of them living in Queens, Madeline Conlon nee Falkenthal 1902-1993 and Viola Albertina Connell, nee Falkenthal, 1906-1983. So strange what you can find on the internet. (I can only assume that they were very fond of their Bonzo toy, and I will of course keep the tag and their link to him.)

Bonzo is unusual in that he seems to only have one moveable arm, his left. There are no repairs so I assume this was intentional, but it does seem odd. He is in very good shape. His tongue seems to have been stitched back on but other than that he seems entirely original and intact. Bonzo also has a wide-eyed, open eyes which are found, but are less typical. That and the very black one ear left me wondering if instead of Bonzo, like Ooloo, he is another character in the Bonzo chronicle. I cannot find any evidence of this, but I am open to suggestions.

I assumed he was made by Chad Valley – the maker of most of the Bonzo dolls from this period seen today – as per my fairly long discourse on them in my posts Blame it on the Blog 2: Bonzo Dog Edition and the more recent Happy Ooloo to Me!. However, once in my possession, I realized he does not have the distinctive Chad Valley label on his foot, nor a Chad Valley pin. The eyes are glass, which is common for the period but not used on the Chad Valley Bonzo toys I have seen. There is, as shown below, a somewhat indistinct face as the only marker. My next thought was a company called Merrythought. They were evidently started in the thirties, in Great Britain, by some folks who left the larger Chad Valley toys. Although I have had trouble tracking down their early trademark, it seems to have been more distinctive label as well.

So folks, a mystery Bonzo! I am interested in hearing back with any thoughts or clues. Meanwhile I have also included a photo of my Chad Valley fellow for comparison. More on this as my toy sleuthing continues!

2 thoughts on “A Mystery Bonzo…and Questions”