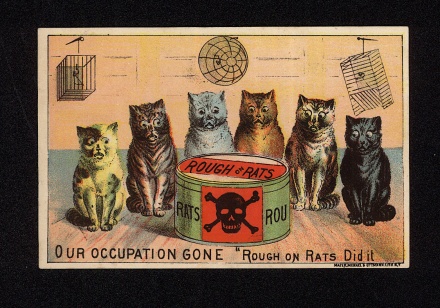 Pam’s Pictorama Post:  Might seem hard to believe, but I have been hunting the purchase of this card diligently for several years. It is more popular than it is especially rare, and on the occasions it came up for auction it sold high. I decided to wait it out and see if I could acquire it for a reasonable price. Last week I must have caught most of the rest of the cat advertising collectors napping and scored it at long last. The image will not be new to any of you who have poked around in the area of Victorian advertising cards, however I don’t think anyone can blame me for feeling that it is a high water mark of sorts for its type.

Ephraim S. Wells, a Jersey City resident, invented said rat poison in 1872, and his wife jokingly called it Rough on Rats and the name stuck. (This story may be apocryphal, but we at Pictorama never underestimate the influence of clever wives on the endeavors of their husbands.)  The E. S. Wells story is a good one. He started with a patent medicine business out of a storefront. It did poorly and in those early years he was generally always barely one step away from financial ruin. The rat poison in question was developed and used first, with great success, in his own rat-ridden shop. He took advantage of the new federal trademark law and cleverly patented the Rough on Rats name – as well as multiple variations. He eventually abandoned the retail business and put serious money on the line for advertising the mail order business.  (Please note that for this background I have made use of a great online source by Loren Gatch and for those of you who want the whole story I suggest having at look at E. S. Wells was Rough on Rats.)

Wells had a good eye for copy and imagery and he made a fortune. The general theme of the advertising played along the lines of cats plunged into unemployment by the brilliant rat ridding product, and also of rats trying to educate their offspring in offensive maneuvers to avoid it. There was evidently even a song Wells produced, which included the dubious lyrics, R-A-T-S, Rats, Rats, Rough on Rats/Hang your dog and drown your cats! Please know that we at Pictorama cannot endorse such tunes. I am sorry, however, that I was unable to locate the sheet music illustration which is probably a pip.

On my card we see these shocked pusses, posed in front of the now useless rat traps hung up on the walls, above the caption Our occupation gone “Rough on Rats Did it. I am greatly enamored of these multicolored cats (a blue one front and center) who are giving this container of rat poison a wide-eyed and mostly open-mouthed, toothy frowns. Tails are neatly curled around cat feet in what is mostly a repetitive cat design formula. They are a great and colorful group.

Here are my other two favorite examples from the more rat-centric versions of the advertising. I especially like the line at the bottom of the top version, This is what killed your poor father. Shun it! Avoid anything containing it throughout your future useful careers. We older heads object to its especial roughness 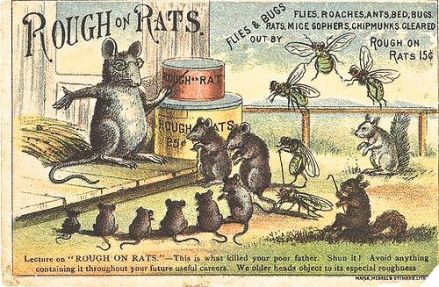 Rough on Rats Lecture, not in Pams-Pictorama.com collection 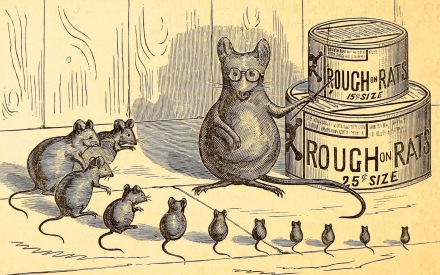 Rough on Rats card, not in Pams-Pictorama.com collection

The back of my card, shown below, features some of the other products offered by Mr. Wells which include, perhaps a bit terrifying Mother Swan’s Worm Syrup which states if worms not expelled by it you may depend they do not exist. Never does harm. Always does good…It is sweet and nice. Taking into consideration that it was ultimately confirmed that Rough on Rats was nothing more than largely unadulterated arsenic, the thought of his patent medicines may take on a darker perspective. Nonetheless, Wells died a wealthy man in 1913 and the company continued with popularity through the 1940’s; it was subsequently sold in 1950, and later went out of business. 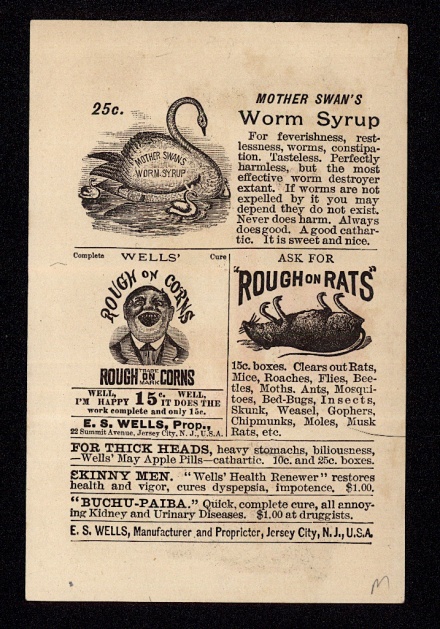 Back of Rough on Rats card, Pams-Pictorama.com collection

In conclusion, having explored the darker side, I offer you a Van Buren cartoon I stumbled across as I did my research. It provided me with a splendid giggle this morning and I hope you will enjoy it as my parting offering as well. It can be found on Youtube here as Rough on Rats.