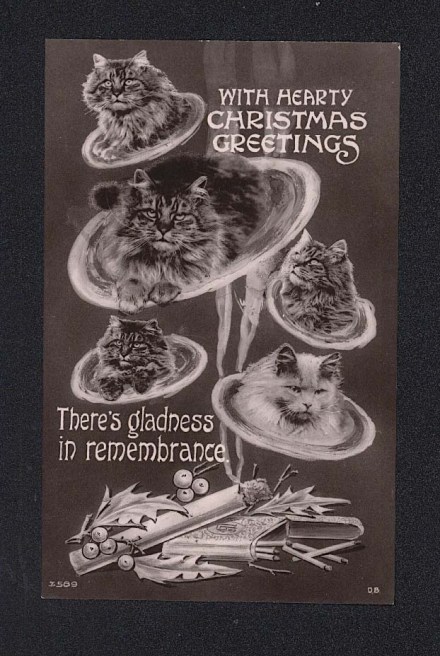 Pam’s Pictorama Photo Post: Kicking off the advanced Christmas season here at Pictorama this week with this recent purchase. This card caught my attention with its sheer oddity. I cannot exactly imagine how someone might have come up with the combination of a smoking cigarette, Christmas and cats on a postcard greeting. It makes me think that the designer was very tired and was desperate for ideas, or perhaps smoking something him or herself. Or maybe it was truly an example of these are some of my favorite things, like the song says.

Several of the cats seem to be escaping out of their surreal smoke rings, although that big, annoyed looking Persian is curled up on his or hers like a pillow. All fluffy Persian variations (or is it Maine Coon?) I can’t quite decide if four of these cats are the same cat or just similar markings. These are some serious looking kitties, especially the one without stripes at the bottom. It is obvious, but I might add, there’s nothing of the celebratory or festive about them – these aren’t some darling kittens – these are some frowning cats.

Meanwhile, then there is the burning cigarette and the matches, artfully falling from their match safe. More than anything about this card, which was never sent and without writing on the back, the match safe dates it for me to the early part of the 20th century. Books of matches were in high fashion by the 1940’s. (I have written about match safes in my collection on two occasions, Safety Match and Match safe – Ya Gotta Make Calls.

For my own part, I have never been a cigarette smoker, not even when I was a teenager. I have smoked maybe three in my life – I never saw the point in it; although I certainly understand that there are people who feel otherwise. Clearly this represents a time when smoking was both comforting and to some degree festive. My ambivalence about it does not extend to how good it looks in early films – it does indeed look sophisticated and cosmopolitan.

The sprig of holly is the sole festive Christmas touch. With Hearty Christmas Greetings…There’s gladness in remembrance it declares. Gladness in remembrance touches on the coming New Year – auld lang syne – out with the old year and in with the new. One can only wonder why this card was tucked away and kept pristinely for all these years except to say Christmas cards seem to be kept, although those are usually ones sent by someone. Perhaps, like me, the photo just entertained someone who found and hung onto it.

I have always been a conscientious writer and saver of cards of all kinds, even before my cat card collecting days commenced. As Pictorama readers and others know, Kim and I have been producing a holiday card together since we first started dating and it is time to start work on the one for this year. I admit to the possibility of some influence from this card as Kim and I begin to contemplate our card design for this year, but we will have to have to wait and see what comes of it. Keep an eye on Pictorama for an eventual preview reveal, but know that we are considering it as we partake of our Thanksgiving dinner later this week.