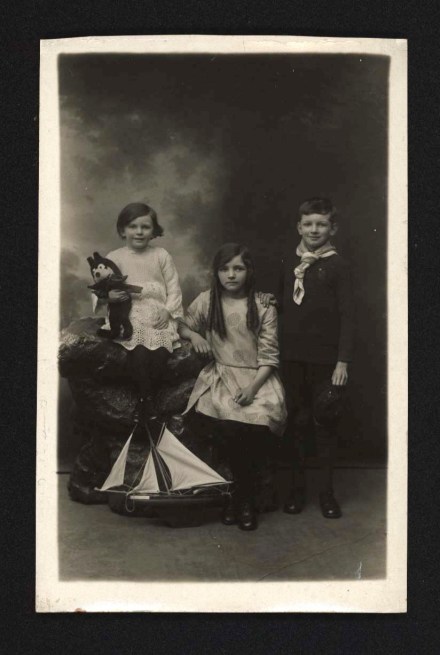 Pam’s Pictorama Photo Post: Lately I have been considering some photos that require looking closely to find Felix. This one I recently purchased on eBay and if we look carefully a lucky little kid has been handed a nice Felix doll to hold. Felix is sporting a huge bow which for me is a bit of a giveaway that he is a prop rather than a beloved object, dragged into the photo. The card is in excellent shape, was never mailed and has nothing written on the back. It came from Great Britain.

While borrowed finery in clothing dates back to early portraits, photos of children have often depended on toys on hand to quiet a child and add something to the proceedings. I have speculated previously that more than once it must have been hard to separate a small child from a prop toy handed over for a photo. (I can assure you I would have put up a fight if they handed me that Felix and then wanted it back – I’ll just say I would!)

Although this youngster clutching Felix looks like s/he is enjoying him or herself I don’t see an argument brewing over its return. (I’m stuck on whether that one is a boy or a girl – I was strongly leaning boy until I looked at the shoes, Mary Janes, and now I am leaning girl. Therefore for the purpose of this post I will say girl.) None of these children look as though they are the type to revolt.

These three are clearly siblings with an unusually strong family resemblance.  Unlike many of the photos I collect, which strongly suggest seaside spur of the moment appeal, this one appears to have been a less fly by night studio than most. It is a photo postcard, but these children appear to be dressed for the occasion, the little girls’ hair curled to perfection and the boy’s also just so. Everything about the set up a tad more upscale and in sort of good taste.

However, the small girl is perched on a splendidly faux rock, as if at the shore, sailboat at her feet – clearly a toy that has been little played with. I don’t know why, but this poor imitation of a boulder appeals to me. The top has been nicely flattened for a seat. The background is a wuzzy, cloudy affair.

Perhaps it was being the daughter of a photographer, but like the cobbler’s children who went without shoes, my family rarely posed for a group photo and other than our requisite school photos and prom pics, never had professional photos taken. Maybe in reality most families don’t – I will let others weigh in on that. Ours was not a sit on Santa’s lap or line up at Sears for a photo family however.

Ultimately, this family did such a nice job with this photo that all these decades later it, with its small Felix doll, has earned a spot in the Pictorama collection.