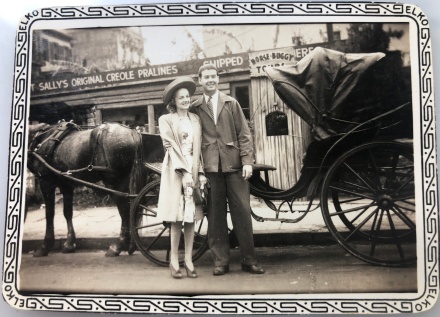 Pam’s Pictorama Photo Post: An odd pairing of two recent photo purchases today under the rumination of travel. I am a homebody in many ways, but I have always also had a travel itch. I have been to Tibet (twice) and been lucky to travel all over Europe, to South America, and most recently South Africa for my jobs first at the Metropolitan Museum and then Jazz at Lincoln Center. (Notably the trips to Tibet were on my own, not for work and I have traveled in Europe on my own as well. Meanwhile, I have documented my conflicted feelings about home versus travel in posts that can be found here and the story of one trip gone very wrong here.) The contemplation of certain destinations have always inflamed this itch – Samarkand, Mongolia, Mustang and Vienna (oddly it has eluded me), remain on my to do list.

Dad traveled incessantly for his work as a news cameraman for ABC. He loved it and it is likely that I inherited the itch from him. (I am under the impression that my mother has only been on a plane twice in her life and perhaps her extreme is what counterbalances the desire to hit the road.) My sister Loren had the itch, although less so than me perhaps; she got engaged while traveling to Prague and made numerous trips to the south of Italy in the last few years of her life. I lost count of the number of times she drove across the country though and she exceeded me there. It felt like she would just do it at the drop of a hat. Although my brother has traveled some, he seems to have been largely free of the burning desire. I would say, after Dad, I get the family prize for wanderlust however, especially on an international scale.

Some of the photos I have been looking at and buying lately are a lot more random than my usual ferreting out of cat and toy photos. Many are clearly old photo albums being broken up and sold, the final refuge for such albums once they have outlived their useful family life. Mostly this just makes me a bit sad and although I am very glad if someone wants an old wedding photo or one of a family vacation. Most don’t speak to me but it pleases me if they can find a home. Sifting through the pile of recent purchases these two stood out for different reasons, but got me to thinking about these destinations as I look at them today.

I love this photo of a couple on holiday in New Orleans. They are radiating a good time holiday here, posed in front of this horse and buggy tour operator, probably preparing to step on or having ended their ride. Happy holiday photos (or day at the seaside or in a photo booth) are a genre I pursue and this one fits nicely.

Just behind the horse is Sally’s Original Creole Pralines. (Sally is still selling those pralines and you can get them online.) The horse and buggy are jolly and perfect, but it is their holiday outfits I love. They are dressed to the nines in their late 40’s garb, especially her in hat, heels and spring weight coat. They are radiating a certain kind of posed for travel joy – having a great time and wanting to remember this being telegraphed into the future, and arriving even now.

Sadly nothing is noted on the back – I would like to have their names. The photo is small, only about 3″x4″ but it has this zippy boarder which declares Elko at each corner. There is a production number printed on the back and I assume that this snap was a requisite add-on as part of the buggy ride package, perhaps taken in the beginning and ready by the time you got back.

I have been to New Orleans, twice, and a very long time ago. I have always wanted to go back and spend more time as both trips were brief and rushed. If I really turned the apartment upside down (it is already upside down really as we are packed up in boxes for the installation of bookcases commencing tomorrow) I could probably locate a not very good photo of a 25 year old me in New Orleans, but I know it isn’t as good as this one. My mouth waters for pralines, beignets, and po’ boys just looking at it.

The second is a sort of odd photo for me to have acquired. It is small, a snapshot. On the back it is identified as Moutrier, Riviera, 1944. Presumably this is a photo of Allied soldiers during the liberation of France in that year, probably enjoying the Bar and Dancing more than the actual Casino aspect of this establishment. I can’t quite make out the name of the establishment detailed with photos of the performers behind these gentleman.

I bought this one for a few dollars. I like the idea of these guys maybe having a good enough time (given how awful fighting the war must have been, they certainly had it coming) that they wanted to commemorate it – and then keeping this photo for decades. The last of this generation is mostly in their nineties and is going now – sadly the Covid virus having pushed more of them along. I have talked to men for whom being shipped there to fight in WWII was their first trip to Europe, for a few the only trip with no desire to go back, others whose lives would take them there frequently. I know at one who loved Italy so much he and his wife settled there for much of his life after the war, working for the army.

The final trip I took to Europe for the Met, in October of 2016, took me to the South of France and Monte Carlo. While the natural beauty of the coast is undeniable, I found the crowded nature of that city uncomfortable and commercial – every single square inch appears to have been built on. We visited the Casino there, briefly and during the day, but while interesting to see that building, gambling holds very little appeal for me and I don’t appear to have documented that part of that trip. (Photos were prohibited inside the Casino.) I offer instead a photo from the roof of my hotel somewhere on the Riviera – I believe I sent this unremarkable shot below to Kim to show him I was really there, landed and settled for the moment on the first day. 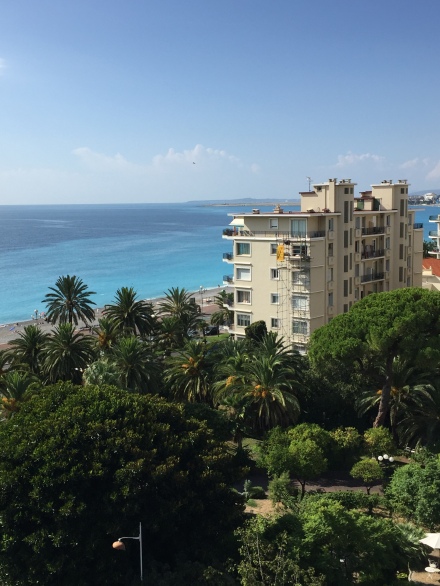 Much of my travel for Jazz at Lincoln Center has been domestic. I was in both Milwaukee and Chicago just a week or so before March 13 and the stay at home order for New York City. Without that order I would have traveled to Boston, London, possibly Russia, Colorado and San Francisco in the intervening time. It is hard for me to believe thinking about it now. Admittedly it seemed like a daunting summer even then – albeit in an entirely different way than it has indeed been daunting.

Other than talking a little bit with Wynton about it, I have not had a chance to ask the orchestra members about what it is like for them to be grounded for so long. Not just no travel, but even more seriously no gigs at all of course, save those online productions we have managed. For them the rhythm of travel mark the coming and going of their work life each year and this interruption is an epoch. Most, like Wynton, have traveled and had gigs every single week of their working lives, starting quite young.

Even more than after 9/11 it is hard to imagine reformatting our lives back into this kind of travel. Taking off our shoes, stuffing our liquids in a small bag to be presented at the commencement of each trip, all quickly became rote annoyances we took in stride and seem like nothing now. However, in a world where folks are wearing gloves at the supermarket and we look a bit askance at the subway, even hopping on an Amtrak to Boston seems unlikely let alone something we have a craving to do. Having said that I do know people for whom either necessity or itchy feet have already gotten them on planes in recent weeks. For now I am taking it slow, with maybe a trip downtown on the subway planned for our vacation in August.