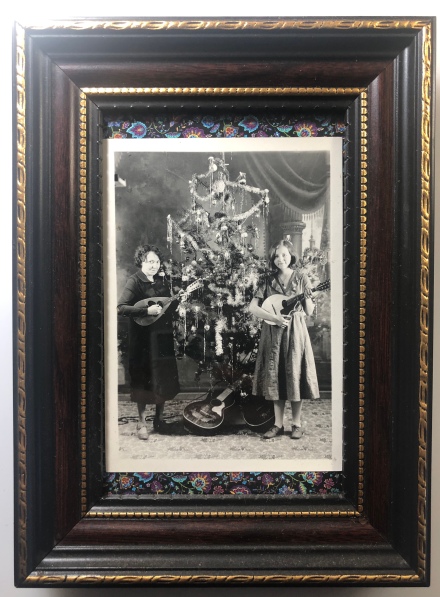 Pam’s Pictorama Post: Today is my second installment of framed photos that have wandered into the Pictorama collection recently. This little treat was a Christmas gift from Kim’s brother Seth who always sends especially thoughtful holiday gifts.

Much like yesterday’s post (which you can find here for those not following in real time), this hotsy totsy item is a wonderful object as he has assembled it, frame and decorative paper behind it spot on. It now has a special perch near my desk. While he has numerous talents, Seth has a great eye and came up with an equally special Christmas gift of a photo a few years back and I featured that one in a post you can read here, Merry Christmas from Seth. (Shown above.)

These mandolin playing women stand on either side of this Christmas tree, which is done up in holiday decorating charm of an earlier era – the lead based garlands and tinsel which sparkled a bit brighter I think, but must have been banned at some point. (I found someone selling new old stock of it this holiday season and you can see it has more heft as well.) The Butlers were a garland and not a tinsel family probably because of the numerous cats we had, although my mom may have been mess adverse as well.

I remember my cat Otto eating some tinsel the first year I had her and had placed a tiny artificial tree in my apartment. (She gobbled it before I could do anything – hell bent on it – she was a nutty cat.) Luckily it didn’t kill her or make her sick – no tinsel after that. Meanwhile, I do remember that my grandmother had ancient tree garlands that were heavier and brighter than what are sold now. They seemed old-fashioned even back in the 1960’s and early ’70’s, but I remember the hard, crinkly feel of them.

The women and the tree are set up in front of a mural of a pillars, sky and sweeping drapery. They are clad in somewhat sensible low-heeled shoes atop a patterned carpet. The mural and even the carpet makes me tempted to guess that this locale is a ballroom or other commercial venue rather than a home. Both are dressed nicely, albeit somewhat subdued – the woman on the right has a necklace on, the other a pin at the neck of her dress.

I itch to hear them play those mandolins. I admit I had not given much thought to mandolin playing until I started working at Jazz at Lincoln Center. I was introduced to the wonders of the mandolin at several concerts, but Marty Stuart really made me take notice. I notice the guitars at the ready in this photo, and somehow I just get the sense that we could hear these women in a great swing band.

Although the Jazz at Lincoln Center orchestra does not have a guitar player as a persistent member of the band, we are often fortunate to often have James Chirillo join us, and he was on the Big Band Holiday tour I joined on the road back in 2017. (You can read about that trip early in my career at Jazz at Lincoln Center here.) James was recently a guest for a Zoom member evening and it was nice to see him and talk with him again. Like all of us he is chomping at the bit to be back in our hall and playing live music again. (Someday I think people will wonder what the heck this Zoom was that we all talk about during the pandemic. Zoom, which I spend most of my days and some of my evenings on, tends to make me feel like I’m in a sort of bubble where I am almost with people, but alas, are not really. Ironically it is like the television phones of the future we all imaged and thought would be so wonderful. I just read speculation about such things in a 1922 volume of The Radio Girls series. More to come on that.)

This has set me off, thinking about the past and wondering about the future as I consume my second cup of coffee so I will leave it here for now, but with another final tip ‘o the hat to my brother in-law who can pick a mighty fine photo – with thanks!