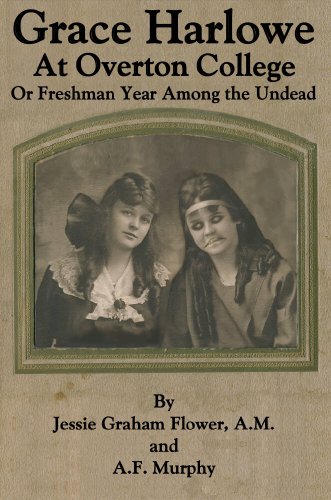 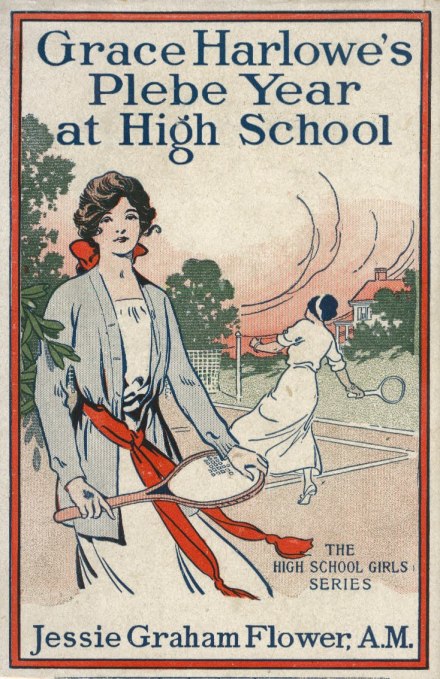 Pam’s Pictorama Post: So I am going to go way off my usual course and take a moment to discuss some early 20th Century series books I have been reading over recent months. Thanks to Project Gutenberg and the availability of some of these books online, I have been able to read many more of these than I ever would have been able (or could have afforded) to do otherwise. I started some of this reading with the Honey Bunch books, but was buying the books which was becoming expensive and taking up considerable room. (I wrote about those in May in my post Honey Bunch.)

I began my online reading adventure with the Grace Harlowe books, first the four volumes covering her high school years and then another five taking place when she and her friends head to college. I have been unable to locate the six books that take Grace to Europe during WWI or the ten devoted to adventures out west, although I would love to at least sample them. The volumes I read were all written by a single author, Josephine Chase, under the name Jessie Graham Flower. (I believe some of the later ones were written by others.) Out of the three series I am talking about today, the adventures of Grace Harlowe were the best written. (I would happily scoop up the remaining books if I could find them.)  Grace and other characters are well define – Grace is sort of a girl’s Frank Merriwell. She is generous, smart and, even when it is at great personal cost, always does the right thing; she is noble. As a result, even those who start out hating her ultimately become her ardent defenders.

These books commence in 1910 and the last of Grace’s pre-war stories is published in 1917. This means it was written in ’16 and while war was on the horizon for the United States, we weren’t in it until April of ’17. Grace Harlowe is very much a young woman of her time, striving toward being a modern woman. However, they are careful with the character, and the most strident ideas – women voting, driving – are expressed through one of her close friends. In that way, Grace can remain a model for everyone. (Grace likes to run and that raises eyebrows – even riding a bike was still strange and questionable for women, as was attending college.) It is an interesting and sobering reminder that the move toward greater freedom and independence for women was not at all a straight line forward. Women were unsure of this path.

A bit more slapdash, but very charming nonetheless, are the six Automobile Girls books published between 1910 and 1913. Written under the name Laura Dent Crane and published by the Henry Altemus Company. I am very glad these have not been lost to the sands of time. Plucky, poor sisters Barbara and Mollie Thurston become friends with the wealthy Ruth Stuart who owns the fabulous motorcar christened Mr. Bubble. The sisters are fatherless and Ruth without a mother, but Ruth has an Aunt Sallie who chaperones the driving adventures. Ruth driving and the girls alone, even with Aunt Sallie in tow, draw considerable consternation throughout these stories. The tension between being a nice girl, but independent and becoming freer, is evident here too. Unlike Grace Harlowe, Ruth Stuart, while generous, very lovable and smart, does not need to embody propriety too – Babs Thurston balances her out somewhat – supplying some of the grit and simpler qualities and values of the time. (I found a postcard which, in a bizarre way, almost illustrates these books and can be found at Buster.)

Pushing forward a tiny bit is the Moving Picture Girls series of seven books published between 1914 and 1916 by the Stratemeyer Syndicate under the name Laura Lee Hope – the famous pseudonym of the author of the Nancy Drew series. This series depicts the story of the DeVere family, father Hosmer and daughters Ruth and Alice, as they are drawn into the world of silent films in the making. The father, a stage actor, is initially forced into silent films due to a throat ailment (one that does not ever seem to clear during the course of the books) which leads to his daughters acting in them as well. There is a great deal of discussion about stage theater and vaudeville and movies – and the need to justify films as legitimate and those who make them not necessarily “improper” is ongoing.

This series – presumably written by numerous people – is a bit more uneven and the characters have less definition. However, the enormous charm of this book is the contemporaneous descriptions of the making of early films which they take great pleasure in describing. The head of the troupe, Mr. Pertell, takes the Comet Film Company on all sorts of locations and, aside from the occasional non-film related mystery, there are film patents to be protected and even other companies trying to steal shots of the Comet players at work. While this is less pointed about women (there is a bit of a line drawn between these two ‘good’ girl daughters acting and the vaudeville actresses also in the troupe) and their emergence, these cover the changing world as represented by film in its infancy here. It was a time when a couple of hundred dollars and some pluck and you too could set up in the film business. 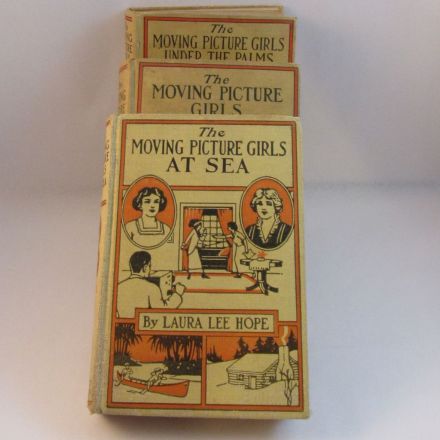 As we now know from history, 1917 comes and WWI changes everything, and the sort of wonderful emerging world of the infant 20th century is quickly shaken with massive changes and the world charges forward. For me these books are a portrait of that very vibrant incubation period before the war and especially revealing to see women finding their sea legs in a bold new world.