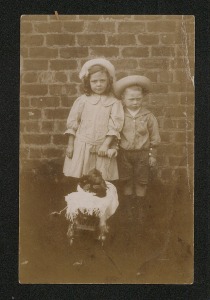 Pam’s Pictorama Photo Post: This is one of those photos where no one really looks like they are having a good time, but is sort of amazing. There is some strange persistence in the universe that cats and monkeys be paired. I don’t know why – the monkey invariably looks bossy and the cat very unhappy. (I have never seen a cat look adoringly at a monkey. Have you?) Although we have a hard time seeing it, this appears to be true here as well. We can barely make out annoyed cat ears – the cat is in the monkey’s grasp! Poor kitty! Meanwhile, the children are taciturn – vaguely beleaguered looking. They don’t appear to be out for a romp with their trained monkey and kitty, do they? I do wonder what the story is.

I have never known a monkey personally, never petted one – although I am entertained by them when I see them, mostly in movies. There is one monkey story handed down in our family. It especially amuses me because it is about my mother who truly is the defender of all animals (domestic and otherwise) and, in the years I have known her, has never met an animal she didn’t like. However, I gather when she was younger and first dating my father they wandered into a pet store one day where there was a monkey in a cage. My mother went up to it and remarked aloud that she didn’t particularly care for monkeys. Well, evidently that little fellow reached out and grabbed the lapel of her jacket and pulled her up to his cage and had to be coerced into letting her go. Needless to say, it didn’t especially endear her to monkeys in the short term – but I know that she would fight for their rights as quickly and courageously as she does any other of our animal friends. That little fellow didn’t know who he was messing with.