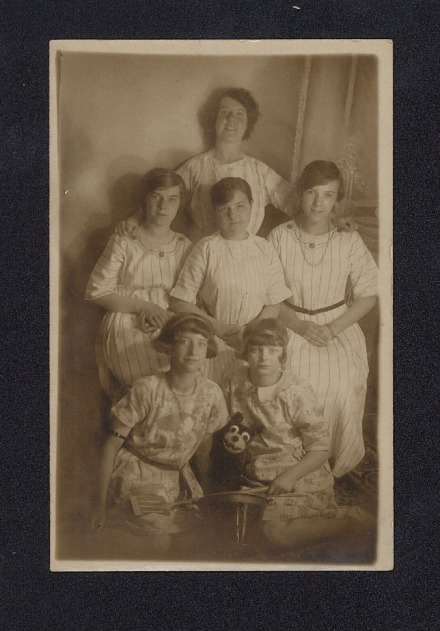 Pam’s Pictorama Photo Post:  At first glance I thought these were sisters gathering around their Felix toy, but closer examination shows some strange items at the bottom of the photo – anyone know what the heck those are? Looks like a giant spatula and pail. In a way, another Mysteries of Felix post.

On further consideration, there is also something loosely of a uniform among these, mostly, striped dresses, belted the same. What is that cheeky little armband the woman in the lower left is wearing? She and the other one seated on the floor, both with their bobbed hair, look like they know how to have a good time! This is a smaller, home version of Felix however. Perhaps the mascot of their ‘team’? Like most of these postcards, this one not written on, nor was it sent. However, I do think it looks like a team that might be worth joining.