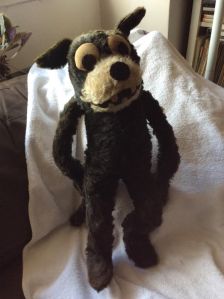 Pam’s Pictorama Toy Post:  I really wasn’t in the market for another Felix, especially not such a large one. Finding a spot for them in our tiny apartment is becoming difficult. Yet when this one failed to sell and was re-listed at a much lower purchase price, I could not ignore the opportunity to purchase it. At the time I was thinking that it was an upgrade for one in my collection, but when it showed up I realized that it is actually a different model. Just as well, I have not yet begun to see myself in the role of seller – I am still accumulating. I gather from the eBay seller that she bought it on a recent Morphy’s auction for considerably more (I do remember it being listed there) and she didn’t have room for it once it arrived!

In terms of size I admit to a certain dysmorphia on occasion when it comes to purchasing toys. It isn’t that I don’t pay attention to the sizes, virtually always listed nicely in inches, feet or centimeters. However, things frequently arrive much smaller than I envisioned. However, on occasion, at least one notable one, I completely misjudge a very large toy. There is a Dean’s Rag Company Mickey Mouse that was a store display which I won in a Hake’s auction several years back – Kim bought it for me as a Christmas gift. It arrived in what can only be described as a small refrigerator box! I was a bit overwhelmed. It took some doing but Mickey resides, hulking in a corner of the bedroom, at the foot of our bed, the size of a small child, watching over us as we sleep.

Below, new Felix with the one I thought he was the same as. Silly me! What was I thinking? 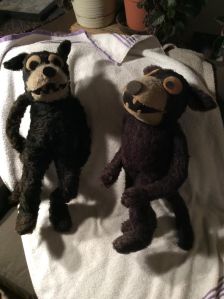