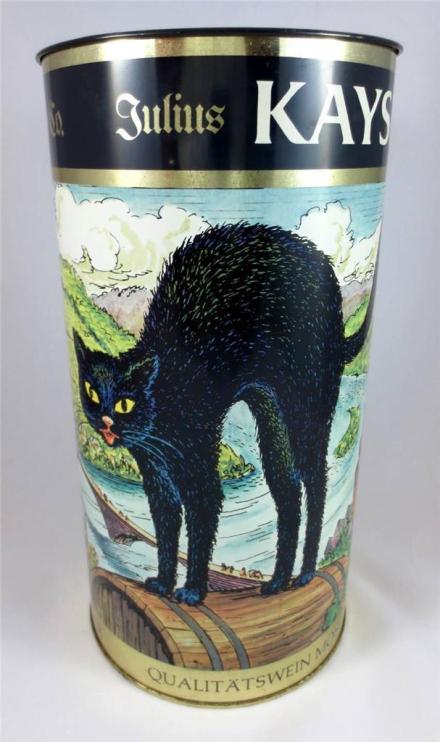 Pam’s Pictorama Post: Frankly this was another case of not reading the listing carefully. I had envisioned this to be less than a quarter of it’s almost 30 inches! I had a clear image of a Mossbacher tin cup I own, and had somehow put these things together. Interesting how the collecting mind works.

Having said that – what cat collector could resist this great black cat advertising image? It is a wine company and they, obviously, sell Black Cat Wine. I assume that a (very large) bottle of wine was tucked in this glorious tin as a gift offering. The lucky cat collector indeed who invited that person over for dinner.

In my search for information about why a black cat was used by the company, I only turned up a bit of advertising from New York Magazine, dated December 20, 1971. It tells this story: Mrs. Kayser has burned the breakfast toast black and Mr. Kayser roars, “The toast is black!” Meanwhile, son Julius the wine maker, nose buried in the Traben Trarbach Gazette, absently passes his father a glass of black-cat-in-the-cellar or Schwarze Katz and we are to assume the black cat logo was born. Or Madison Avenue execs of the 1970’s wanted us to believe. Hmmm, anyway, that’s as close as I could come.

I am not sure what use I will put this item to, although this apartment can always use a place to stash this or that and a black cat tin will always be welcome.

Post Script: I rarely get an opportunity for such an interesting update so quickly, but a FB friend, Ryek Hvek, gave me the key to more interesting information. According to him, the wine was named when a black cat jumped onto one of three barrels of wine and assumed the pose while a customer was choosing among the barrels. He also directed me to the images below – a statue of the cat in question in Zell, erected about 80 years ago, and one of the black plastic cat figures that came on the bottle of wine. (My brother in-law says that his mom, Marie, a well-known cat lover, used to be partial to it.) Lastly, also a cat stamp from the town in keeping with the theme. Let’s all book a trip to Germany to worship at the altar of the cat statue and drink wine – I’m up for it! 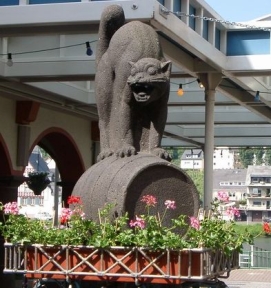