Pam’s Pictorama: Back in December of ’14 I wrote Blame It on the Blog 2 where I displayed and discussed the perfectly excellent Bonzo Kim had purchased me as a Christmas gift. That acquisition had in part come out of an earlier post devoted to Bonzo (Going to the Dogs – Bonzo) where I had discovered the Chad Valley Bonzo toys. Well, we can blame it on the blog again, because while I was researching those toys – and stumbling onto the lovely Bonzos made by Chad Valley, I found a very rarified toy indeed – Ooloo the Cat!

It seems that cartoon Ooloo, designed by the same artist George Studdy, knocked Bonzo right off center stage at Sketch Magazine where his full page strips and sight gag drawings had been featured on a regular basis. Bonzo had been working the Sketch Magazine gig since 1921, but his appearances had fallen off by 1927. On January 2, 1929, Ooloo made her first appearance in the mag and knocked Bonzo right out of the box. Bonzo made only occasional appearances after that and I read that an appearance five months later in May of that year may have been Bonzo’s last in the magazine. Below is her first, fluffy premiere in Sketch. 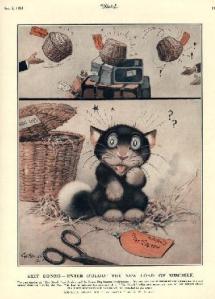 However, Bonzo got his revenge fully in the long afterlife of marketing. Bonzo seems to have launched items in his image, both licensed and clearly off-model, that rival Felix and Mickey Mouse both in breadth and sheer number. His longevity, considering the limited reissue of and interest in the actual strips, is extraordinary and reaches not only throughout Europe and the United States, but seems to reach as far as Japan. His ubiquitous, sleepy, dog face image plays out over Valentines, figurines, lamps, a band, toys – you name it! I have personally speculated on the possible influence of his image on the Japanese character Norakuro (featured here Norakuro – the Japanese Felix and also in an early post here, Pam’s Toy Post) but have never established a link.

Ooloo, by comparison, is little known today and sadly toys did not proliferate. As above, I discovered this outstanding Chad Valley Ooloo when researching the toys for the other post. They are indeed rare however and frankly I had little hope of ever acquiring one of these fine specimens. Therefore, I was over the moon when this one appeared on eBay just before my birthday this year! Kim generously stepped in and Ooloo, thanks to the considerate quick packing and shipping of the seller, arrived within days of my birthday. (As a bonus, the seller turned out to be the same wonderful woman in Belgium who sold me Bonzo! A shout out to Regine who certainly has an extraordinary collection of toys.) As I always say, I am one lucky toy collecting woman. Yay!

Ooloo is a truly outstanding addition to this woman’s toy cat collection and a very finely made toy. In the photos I have tried to show some of the touches and details that make this an especially wonderful toy: the bits of color in the ears and around the nose – the tiny stitches under the eyes. Ooloo retains her whiskers and these interesting thread bits on one paw that seem to be claws – I thought they were just pulls in the fabric in the photo but have determined that they were meant to be there. It is a thoughtfully made toy indeed.

Below is an image of an Ooloo perfume bottle, one of the few fairly available Ooloo pieces of merchandise. There may be one or two other toys out there – and be assured I will be ferreting them all out for your pleasure – and mine!