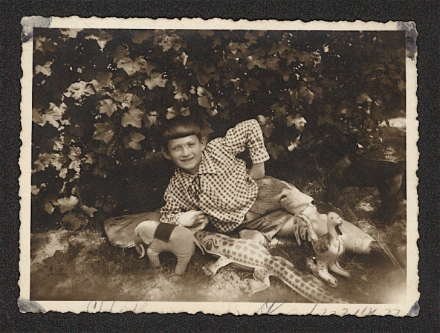 Pam’s Pictorama Photo Post: This photo, a small early snapshot, hails from Hungary, or at least that is where I purchased it from. I couldn’t help but admire this fellow with his toy-proud pose, his treasure piled up in front of him. It was that pose that caught my eye – I can think of several photos where I am as toy proud and here below is an especially maniacal one of me holding Donald and an Aesop’s Fable doll.

In particular I like this kid’s elephant toy. (Although that alligator is sort of noteworthy too I think.) I am a sucker for elephants and it is amazing I have controlled myself for the most part. I am holding out for a Steiff elephant on wheels and always keep an eye out for one. However, years ago Kim found the elephant toy below, on a street where we were strolling. Kim very nicely painted eyes, tusks and toes on where there were none – although later we recognized traces of where the eyes were glued on previously. Now he, my only elephant toy to speak of, is a Kim Deitch special! Somewhat appropriately, here he is on Kim’s desk. 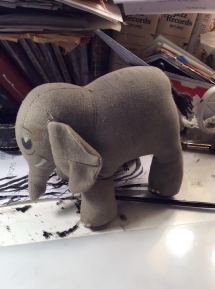 Check out his tail!