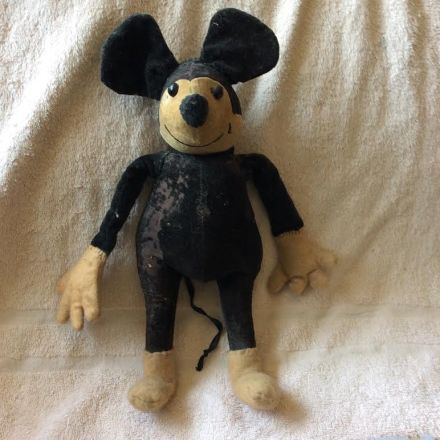 Pam’s Pictorama Toy Post: This is the first Mickey I ever purchased. I bought him at a antique toy fair in Atlantic City years ago. He was quite ratty even then and I didn’t pay much for him. At the time buying mice seemed odd to the cat purchaser in me, but he wasn’t expensive and he seemed to need a home, so he was the first mice among my cats. I continue to have a soft spot for him and the cats don’t seem to mind him.

I didn’t realize it at first, but he seems to be made from a pattern. As my regular readers know, I have recently opined on my lack of sewing acumen. Long story short, I’m lucky I can sew a button on, therefore I am rather awestruck by someone assembling toys from patterns, a skill I would love to acquire.

I gather the practice was very common and there were a number of ways you could get the patterns, through magazines or purchased from a sewing store. (You can see my lament of the long-lost fabric and notions store – Needled – a recent post.) I was deeply tempted by someone selling a pattern for a large Felix toy on eBay several years ago. The photo below is from her ad. I believe, strangely, that it is for knitting Felix – how is that possible? (While I can imagine a universe where I sew – in fact I even had fantasies about being good at sewing when I was younger – I cannot imagine a world where I knit. Those big plastic sticks produce nothing in my hands, let alone a giant Felix.) 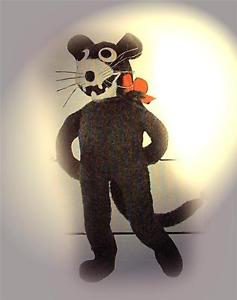 Felix from a pattern available online

The seamstress behind my Mickey did a pretty superb job. The seams are very professional and the hand stitching attaching his hands and feet is neat and even. He appears to have had his eye moved on one side at some point, leaving a sort of beauty mark, but I think she or he had it properly stitched in originally. He was constructed of a soft black velvet which has worn away, but his arms, head, ears and tail are properly and perfectly put together.

It is tempting to think about – assembling my own toys with vintage patterns. However, I think I am smart enough to know it would all turn to chaos and dross in my hands so I think I will stick with buying.