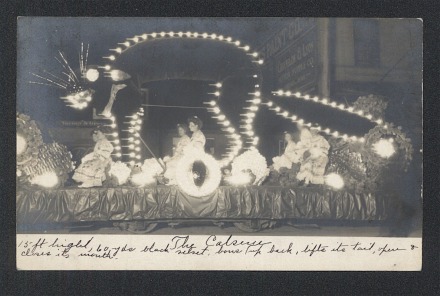 Pam’s Pictorama Photo Post: Portland, OR is penciled on the back of this card and given the great history of the cat parade float there I would assume it is true! (The seller seemed to be offering a number of Portland Rose Parade related photo postcards so perhaps it was an album of them.) For those of you who have been here since the beginning of this blog know that some of my earliest photo postcard posts hailed from this auspicious location where extraordinary parade floats – sporting Felix and black cats of other kinds – seem to have been the norm at the early part of the 20th century. This card, with its enormous glowing cat eye and cat outline alight in bulbs was not clear to me at first. Once I looked carefully and realized what it was, I was utterly enamored.

This precious card was never mailed and there is no obvious way to date it. If I knew a bit more about the history of printing these cards I might be able to make a more sophisticated guess, but I would say the aughts or the teens looking at the costumes and how the card is made.

This enormous kitty, arched back, has his own bright eye and spiky lit-up whiskers, big bow around his neck, and then there’s that huge single cat eye glowing in the middle of the float. In reality it is amazing that in the dark with just the kitty float for light that they were able to get such a good photo. Written in a neat hand at the bottom it says, The Catseye, 15 ft high, 60  yds black velvet, bows [sic?] up back, lifts its tail opens & closes its mouth. How I would have liked to see it in action! Oh lucky costumed few who got to ride on it. Can’t help but wonder what it all meant. Perhaps a secret society like the Hoo-Hoos as outlined in my post Spirit of the Golden West? Could be that very one. I have never belonged to a secret society, but if I could find one that promoted parade floats like this one I would be very tempted indeed – it would have to be some kind of interesting. I will pull Cookie and Blackie into a huddle later and see if we can come up with a plan. A good project for me and the kits this winter. (We’ll let Kim join too I think.)

One thought on “Cat’s Eye on Parade”