Pam’s Pictorama: This kitty cut-out is about six inches high. She (pink ribbon makes me think she and there’s a certain girl cat quality) sports a rather enormous bell – gosh, birds were certainly safe around this cat unless they were stone deaf. Kim is not a fan of this particular acquisition in the cat advertising category. I admit that is later than the Victorian cards I have been purchasing and it seems to have had another purpose. As you can see below, the back of the card is both advertising for the soap and instruction for the use. Soap Kitty had a Doggie partner as well and you could obtain on of these Cats or Dog. Purchase 3 cakes of BOGUE’S SOAP for 25 cents. I have supplied the dog as a grab off of Google and he is missing his “stand-up strip” which obscures the interesting if racist diatribe on the back of the cat card, also shown at the bottom of the post.

Dog image, not in my collection.

With a quick search I was interested to find out a bit about Charles B. Bogue from the Historic Albion, Michigan website. Despite the NYC Hudson Street address on the card, Mr. Bogue hailed originally from Michigan and then made his soap fortune in Chicago.

In his personal life, Charles B. Bogue was married to Martha Gleason Harris in 1876, and the couple had three children, all of whom are buried in Riverside Cemetery. After their divorce in 1899, Martha married Charles’ brother George Bogue. Charles in the meantime married Eva Knight of Chicago and moved there where he continued in the mercantile trade under the firm name Bogue Soap Company. He had one daughter by his second marriage. Charles was still living in Chicago in the late 1920s.

The claims made by the soap, complete with instructions – for use in all seasons, no boiling…saves labor, shortens the wash day, and makes home happy. My favorite is no more blue Mondays. Not to mention the $100 offer for any bar of Bogue’s Soap that will not do all that is claimed for it.

A Bogue’s soap company (artisanal and utterly devoid of cats, dogs, or racist advertising) exists today in Ojai, California. Their soap can be purchased at Whole Foods and other venues. There’s no reference to the soap’s history and perhaps is not even the same company. Artisanal or not, I would personally like them much better if they were still offering cat and dog cut-outs with every 75 cent purchase. However, buy it, try it, you’ll like it! 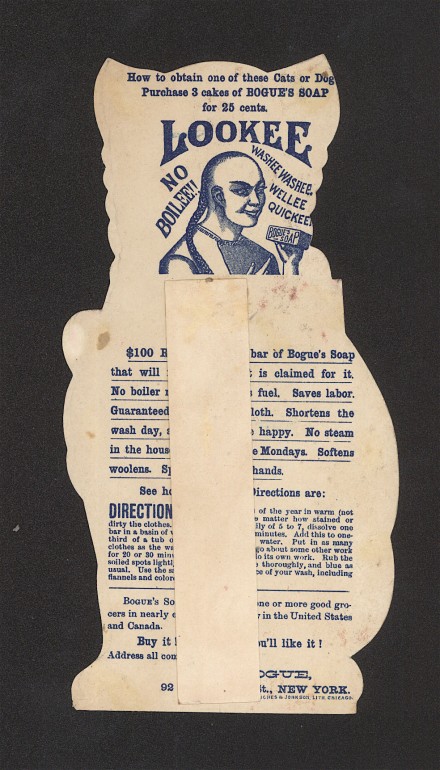 Back of cat cut-out with cardboard strip to stand-up

One thought on “Bogue’s Soap”