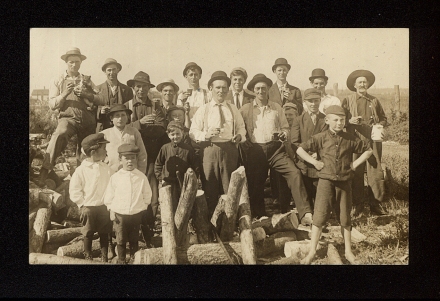 Pam’s Pictorama Photo Post: While I am a fan of cat photos, and as my readers know usually buy photos because of the presence of a cat, in some photos like this one, it has to be admitted that the cat is coincidental at best. Although I do find it truly charming that the big fellow in the upper left snatched up that puss in time for the photo, it is not what strikes us most about this glorious photo of these men and boys in the midst of some sort of a beer break among whatever work was being done among these logs. This card is unused and undated – no identification of where or when this might have been taken. A guess puts it back in the teens judging from the clothing.

The kid with his hands on his hips and legs astride really helps make this photo – he is the only one who seems to be at the halfway point between the very young boys and the men. One can pretty much see him thinking that he too should have a beer in his hand. (However, as I look very closely, there are perhaps another one or two better dressed boys of tween age tucked in amongst the men.) There is a strange mix of those in working clothes and those in nicer shirts and even ties and jackets – some ties loosened against the heat of the day, relaxing a bit. Everyone is mixing however, and seem to be all of one mind – having a superb time. Not a hint of a woman or girl to be seen. This one is all men.

Many people have written about the demise of men’s hats and this photo tells quite a story through the hats. Every single man and boy is wearing one. The variety ranges from numerous bowlers on the suited men, a series of almost identical caps on the boys and then all sorts of well-worn broad brimmed hats on the men in work clothes. Everyone has pushed their brim back a bit for the photo. They are all photo conscious in a great way. And in some ways, this is why I collect these photos – to savor a moment of time in the past when everyone stopped for just a moment and said, “Look at us; we’re having a great time and we want to remember it.”

One thought on “Beer Break”