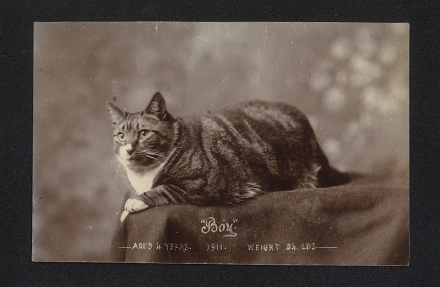 Pam’s Pictorama Photo Post: This card caught my eye recently and I decided he was a fine addition to the Pictorama collection. At four years he has achieved quite a solid citizen look indeed, and I have long been a sucker for a fat boy cat with a spotty nose. I am especially fond of his very white bib and paws – and he is a big fellow weighing in at 24 lbs! My goodness, quite the guy. The name and information appears painted on during the photo process. I don’t really understand how, but it is very neatly and decoratively done here. Often these applied on messages of this sort look like white pen, and are usually neat if not this pretty; however sometimes such writing is more of a scrawl. I am always a bit fascinated by this – did they print it themselves? Seems unlikely. Did they send the information along with the film to be printed? Was it a kit of sorts?

I have seen photo postcard cameras and imagine that postcards like these came from a mix of home executed or maybe occasionally by itinerant photographers. According to Wikipedia, Kodak introduced the 3A Folding Pocket Camera which took film that could then be printed on a postcard back and in ’07 they introduced a service called real photo postcards which enabled people to make postcards from any photo they took so this was certainly in place by the time this card was made. I assume some place in this process they allowed you the opportunity for a title and a few words.

This card was never used or written on, but we know from the front that it was done in 1911. Until I read the Wikipedia entry I didn’t realize that the term real photo postcards originated with Kodak. Interesting, they also state that it was more widely used by the public than in Kodak marketing. These cards are still called that today, sometimes by the abbreviation rppc.

As for Boy, I wonder about his name. It seems like a careless name for a prize kitty who was ultimately beloved enough to be memorialized on film in this way. You never know about cat names though. Sometimes they just materialize and stick and you don’t know for sure how or why. I remember thinking that back when we were naming Cookie and Blackie a few years ago. Giving them names seemed so arbitrary at first. (The person who rescued them had been calling them Thing 1 and Thing 2. Although we teased them with that for a bit, and it even seemed somewhat fitting to the little crazy furry aliens they seemed to be at first, I couldn’t warm to it.) Kim christened Blackie and I named Cookie. (She’s a smart Cookie for one thing, but I once knew a glorious fat Tuxedo named Cookie belonging to a friend and I was thinking of him at the time.) You know that ultimately you will get so used to calling the kits by those names, until the idea of them and the name merges, and you eventually can’t imagine them being called anything else.

2 thoughts on “A Cat Named Boy”