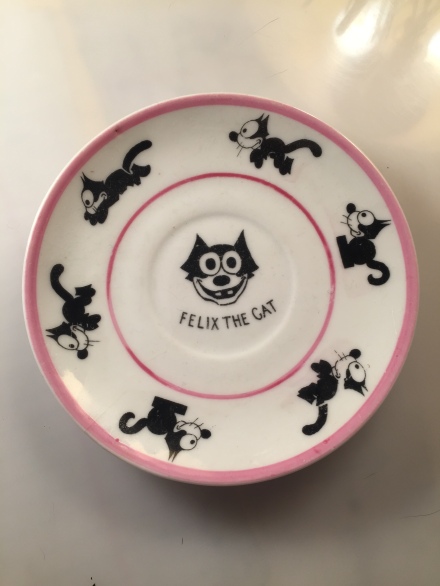 Pam’s Pictorama: This pattern of Felix china has long attracted me and I have very much wanted to own at least a specimen example and now I do. It is Royal Rudolstadt made in 1925, or so it appears from what I read online, although this dish is unmarked. While the Felix-es around the edges look very regular and professional, there’s something sort of wonderfully wonky about the Felix face in the middle. I have always liked the way the figures around the edge look almost as if they would animate if you spin the plate. (They don’t.)

This set of dishes brings the tally of Felix china that I am aware of to three different designs. The others range broadly, from the one I wrote about in Living the Felix Life which is very professional looking and Felix is exactly the same on each to the one in the post here, Dishing Felix, which looks very much like it was copied freehand. 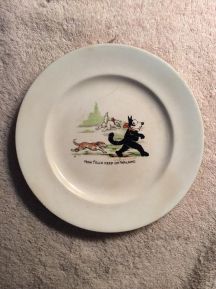 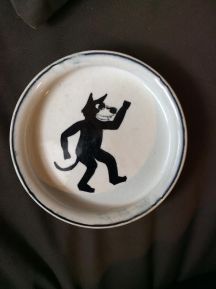 Today’s dish falls soundly between the others aesthetically and I assume it is a tea cup saucer. What a racy tea set this must have been! I have seen cups and creamers from it, but oddly never a tea or coffee pot. I believe pieces are also trimmed in yellow, green and blue and in fact this may be the first pink one I have seen. None of these dishes impresses me as having been made for children. I do believe I would be more inclined to have tea parties if I owned this full set!

I briefly considered buying these as high end cat dishes which, among other things, would make poor Kim a nervous wreck as he is often the one handling the dishes at feeding time. (I neither get up early enough, nor do I get home early enough for Mr. Blackie and Ms. Cookie it seems.) The kits have rather splendid cat dishes anyway and I have decided to show them here as well while we are on the subject. They don’t rise to the level of Felix Royal Rudolstadt by any means, but I think are definitely a step above plastic – and C&B are always happy to see them.