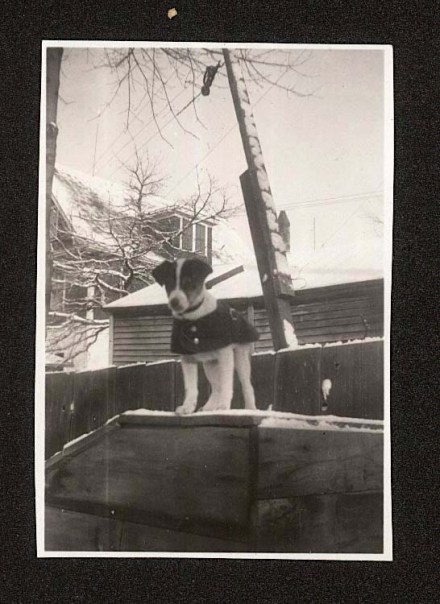 Pam’s Pictorama Photo Post: I saw and bought this to ultimately give to a Jack Russell owning new colleague at work. I liked this little guy sporting this sort of homemade looking doggie garb. It is keeping him warm on this snowy day and he also wears a collar. Dogs rarely get center stage here at Pictorama. However, I grew up with dogs, some of you have read those stories, to the same degree as cats so it isn’t like I don’t like them. I do. I am sure if I didn’t live in a tiny studio apartment I would probably live with at least one. And although I have generally lived with medium and large dogs, I have over time developed a soft spot for small ones too. Jack Russell Terriers in particular seem like the right kind of lively canine companions – the kind of dog that likes having a job and takes it seriously. Bred for fox hunting I understand they are high energy and smart. According to the back of the photo, this fellow is Mickey II (I have a friend who has named a seemingly endless line of Poodles Pierre) at 10 weeks, and the photo was printed on December 6, 1937.

He appears to be perched on some sort of wooden storage container – for garbage cans perhaps? For some reason as I look at this photo today I get a yen for having a backyard. There doesn’t seem to be anything especially glorious about this one, but I am not sure it matters. I think any patch of outside you call your own is a special thing and something we unconsciously yearn for sometimes in the city. When you are a kid you learn every inch of it. The designated safe space to be sent out to inhabit when your parents were tired of you inside, or for some other reason felt like you should be “outside playing” it often fell to you to figure out how to activate that space. We didn’t have yards with swings or other features – in retrospect other than the river running behind it, the yards were somewhat barren growing up. I can still remember what they looked like though – the trees that we played under (none of them were climbable) and the docks with their dead fish smells – seagulls having smashed oyster shells on them heightening the familiar stink of seaweed and crab shells in a trap. Still, you always knew that life was teeming in the water just below the surface and just lying on the dock and watching the sea world below was a failsafe activity. We lived on the river in both houses I grew up in, but the one I knew best had a floating dock and the water was calmer. By that time we knew how to swim and my parents worried less when we spent time by the water.

It is only just now starting to grow chillier here in the Northeast, a fall which is being discussed for being more like extended summer this year. However, the yellow light tugs me back to my childhood as it does every year. First the light of September which reminds me of back-to-school from my earliest years – at least those are the ones that come to mind. The school smells of those hallways new to my nose which for some reason still plays over in my mind. But the light of October and early November make me think of playing in our backyard, even more than the long days of summer when I surely spent more time outside. This time of the year reminds me of being about twelve years old and just old enough to feel like I should be outside doing things. Still young enough that making forts and hideaways among the trees appealed and that’s what I remember.

This guy in someone’s backyard in 1937 makes me nostalgic for a backyard this morning. A place where you were out in the world and you could imagine all sorts of adventures, but you knew you were nonetheless home safe.