Pam’s Pictorama Post: Today my mind is on comics – the ones of my childhood. Recently I realized that oddly enough, I have a distinct memory of my father reading me Peanuts, but no other strip – surely he didn’t literally only read that one and let the others go begging, but that is what I remember. I assume it started when I was very small and couldn’t read at all, but I do recall that as my nascent skills evolved, I was able to read along with him. Peanuts was a pretty easy read, although Nancy, as we all know, was the easiest and the first you could puzzle out on your own – often no words at all. (The miracle of story telling solely through pictures – the silent film of comics.)

However, for all of that, it is Peanuts that I associate with my Dad and Sunday morning childhood. (Saturday morning was Roadrunner cartoons, but we will discuss that another time perhaps.) I have chosen a Sunday strip from 1970 below, which would have put me at age six. It is one featuring Snoopy and Lucy and somehow I remember those as the ones he was partial to. 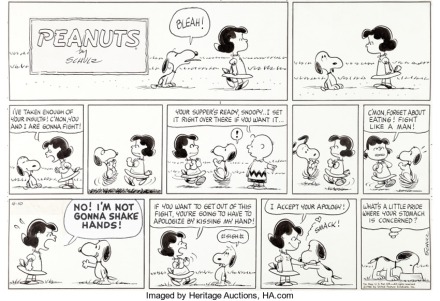 As a career long cameraman for ABC News, my father traveled constantly and often for long periods, so I know it certainly wasn’t something we did every Sunday and, although I certainly remember my mother and father both reading me bedtime stories, I never remember Mom reading me comics from the paper, nor did I ask her to. Presumably my sister Loren was right in there as well, although I don’t remember that either, and perhaps with a two year age difference between us it mostly really was me alone, sitting on my Dad’s lap and looking at the comics. (Apologies to my brother Edward, but at almost seven years younger he was not yet in the picture.) Dad would read the strips and we would have a good chuckle. Perhaps at my insistence, in homage to the strip our first cat, a cow-spotty black and white one, was christened Snoopy.

Many years later, when I was launched into my first job at the Metropolitan Museum and living a commuting distance away from home, fax machines were suddenly in vogue. My father developed the habit of faxing me the strip Mutts. I had briefly met Patrick McDonnell in the mid-90’s (as well as the cat and dog who appear to have inspired the strip) and he seemed like an extraordinarily nice person. I loved the strip which was in its infancy. It did remind me just a bit of Peanuts and it was easy to see why it appealed to my father too, although I don’t think we ever discussed that aspect of it. I did not get a daily paper with comics and so, out of the blue, my father initiated a comprehensive campaign of faxing them to me, several on a page, a couple of times a week. I bought a few of the compilations and shared those with Dad, but I think he liked the dailiness of finding them in the paper and the self-appointed task of sending them.

I was reminded of all of this recently when, on my trip to London in February, I found myself warming up and drying off in a comic book store near Leicester Square. After tending to the family business of checking on the Kim Deitch selection (yes, I do that in comic book stores Kim – you probably didn’t know that, but you do now) I found some Mutts and Peanuts compilations and was briefly tempted to buy one for Dad. After coming to my senses and realizing that they were of course more easily bought at home without stuffing them into and already bursting suitcase, I did not. However for a lovely moment I was transported back to those years of sharing comics with Dad.