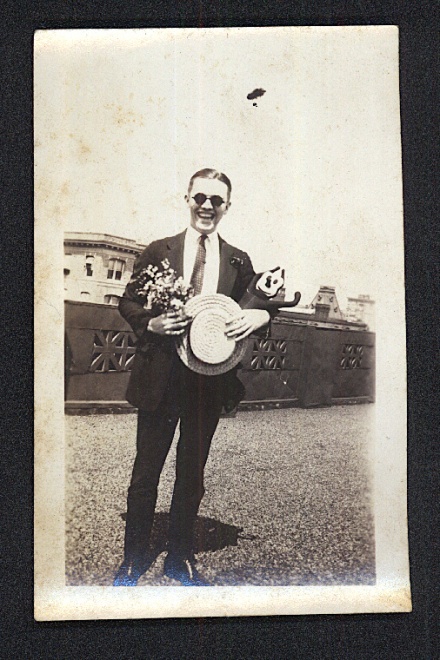 Pam’s Pictorama Photo Post: Today’s photo turned up under a poor listing on eBay and I snatched it up before anyone else spied it. After all, who wouldn’t want this photo of this jolly grinning fellow, clutching archetypal straw hat, flowers and Krazy Kat? I will go out on a limb and speculate that he was a courtin’ and the flowers and Krazy were an offering to his beloved. And really, who wouldn’t be wooed and wowed by that? That toy cat would go a long way to winning me, let alone the flowers and the dapper appearance. According to the back of the photo this is Harry Smith and he is in Augusta, Ga. He’s quite the sport with his hat, sunglasses, clearly parted hair and offerings. No date, but we can make some assumptions about it being the 1920’s from his togs and that great Krazy Kat toy.

Here at Pictorama a year of birthday and Valentine’s Day have just passed. Having a birthday a few days before Valentine’s Day meant a childhood of Valentine decorations at my parties which was always cheerful – however as an adult the bright red and shiny cupids and hearts remind me more of a houseful of kids charged with birthday cake and chocolate than love and romance, the two will always be intertwined.

My father was the first man in my life to meet this double celebratory challenge gallantly. He always had a little something special for us kids for Valentine’s Day, despite it being days after my birthday which had been appropriately celebrated. Heart shaped boxes of candy, a silver heart-shaped keychain one year which I used for a very long time after. (And I’m still a total sucker for those boxes of Russell Stover chocolates which are the taste of my childhood Valentines. I just bestowed an extra large one on my office. The Easter baskets and candy have the same effect on me.) February in the Northeast tends to be a cold, snowy and somewhat miserable month, so the additional festivities make it a bit more cheerful to get through.

My sister Loren put her stamp on my birthday in adulthood by insisting on calling me at an ungodly early hour, claiming that she needed to be the first to wish me a Happy Birthday. On another occasion she declared that my birthday should be a day off from work and we spent the day together. I acquired tickets to the live butterfly exhibit at the Museum of Natural History, which was brand new at the time. However, Loren had not told me she was afraid of butterflies until we were there and they were landing all over us! (She said she hadn’t wanted to disappoint me.)

After Loren died and birthdays suddenly became difficult, I instituted the Aquarian month of dinners and lunches to cheer the month up. I totted up all my fellow Aquarians and invited each one to get together for dinner, or lunch failing dinner availability. It cut an interesting and somewhat random path through friends and acquaintances, and time spent with friends is always a good way to focus one’s energy for a year ahead. The participants have waxed and waned over the years with only two original invitees still in the mix – over a dozen years folks moved away, some elderly ones died. I haven’t added anyone in a few years, although I just found out that someone at work is a candidate, a late January birthday that just slides into the Aquarius fold.

In addition, I am lucky that I have Kim, the best husband ever, who always makes my birthday and Valentine’s Day very special – we spend a day (or more!) near my birthday devoted to digging around in antique toy stores and the sort of dusty haunts that result in the purchase of interesting photos and strange odd bits. And of course he tops himself each February with his Valentine’s Day drawing. (Actually this production starts in January annually as it has grown more elaborate. For anyone who is a new to Pictorama a few of these can be seen here, here, and this year’s here.)

Kim actually did in fact also give me my very own Krazy Kat toy (this same Averill version as Harry Smith clutches here) on my birthday years ago, which is a story for its own post one day. This year’s birthday adventure and acquisitions, some great toys and photos, will also be upcoming as well in a series of future posts. In fact, I will finish this post up so Kim and I can get ready to go out. There was a store which defied us by closing unexpectedly last week. Let’s see what can be found there today. I will be sure to let you know.