Pam’s Pictorama Photo Post: Felix parade floats form a sort of a subgenre of Felix photographs for those of us who collect photos of Felix in his various incarnations. There are a number of especially popular ones from the New York, Macy’s Thanksgiving Day parade that are widely available for sale in various, mostly reproduced form. My collection is largely made up of those from parades that capitalized on Felix’s likeness without all the fuss and bother of his copyright. I have devoted a few posts to these including Felix on Parade which can be found here. (I think Felix for a Cause, here  should be taken into consideration as well, a giant Felix doll in an open air car should count, yes?)

Pams-Pictorama.com collection – from the Felix for a Cause post

Today’s balloon photos appear to be a version of the Felix the Cat parade balloon designed by mastermind of parade balloons, puppeteer Tony Sarg. I read that these early balloons were filled with oxygen, not helium, the first year and were carried on poles by Macy’s workers, drafted into working the holiday. The move to helium the following year resulted in the idea of setting the balloons free at the end of the parade and in subsequent years offering a reward for their return. With some trial and error this publicity stunt continued until 1931 when the balloons almost brought down a barnstorming plane whose pilot thought bringing them in might be fun. This means that although this design may have been in use for several years, the actual balloon would have been different.

In case we needed further proof that the internet isn’t always consistent or correct, there are numerous conflicting thoughts about what year this design balloon is from. It is identified in numerous places as the 1927 premiere Sarg Felix – the first year balloons were in the parade. Yet there are also newspaper accounts of that first year Felix blowing into wires and catching fire – which is then identified in photos as a horizontal cat balloon below which looks much less Felix-like. Who am I to argue with the New York Times though? 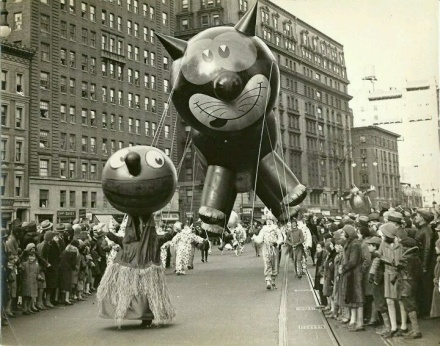 Whatever the story, suffice it to say, it is one of the early versions of Felix, depicted in early hand-tinted colored, captured here in 3-D for a hand-held viewing device. I love to look down the block, the car, the building with another uncolored balloon in front of it, and the guy caught in time, walking by. There is an early morning light that is very evocative for me. The tinting isn’t identical – it is heavier on the right side and I prefer the left one. I wonder if that difference in tinting contributes to the 3-D effect being less than ideal. (I’m not great at seeing depth in 3-D without a viewing anyway, but Kim is very practiced and good at it. He has commented that it isn’t very good.) For me, this is the right photo to own, before this brand new Felix balloon starts out on its Thanksgiving adventure, whatever it turned out to be that year.