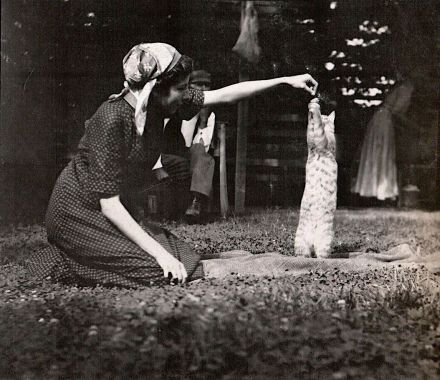 Pam’s Pictorama Photo Post: This is an actual photo, not a photo postcard, which weighs in at only about 3.5″x 3″. It was taken from an album which it had been glued into, black paper stuck to the back. It is an interesting photo when studied – the woman in the background is wearing a fully long dress, as I guess the woman with the cat is although that is a bit hard to see. This dates it early in the 20th century. Meanwhile, a man with a cap, somewhat obscured, is seated behind the woman and cat.

Of course I have purchased it because of this wonderful tabby. He appears to be an orange tabby – which means he is likely to be a he as Google informs me that males outnumber female orange tabbies about 80% to 20%. This photo has an interesting immediacy. When it is blown up large you can see that what the woman holds is a toy on a string, not food which was my immediate thought.

I have had close association with several orange striped cats in my life. My mother has a rather magnificent one named Red right now, who was devoted to my father and who presents his toys and acts as ambassador cat when I overnight in New Jersey.  Pictorama readers my remember my childhood cat Pumpkin, an enormous and dog-like kitty who used to follow me to the bus stop in the morning growing up. He was much larger than this fellow, but had an amazing fluffy striped tummy and tail. He would roll and display his tummy in a come hither way – and then chomp down on your arm with all his considerable force when you tried to pet him. Bad kitty! We had to warn guests and even delivery folks not to be taken in.

Therefore, I can only say I was shocked with Cookie and Blackie arrived here with a very canine desire to have their tummies rubbed – since kittenhood they roll over and demand tummy pets multiple times a day. Cookie in particular needs some tummy rubs every morning to start the day. She will meow and stretch and roll with happiness when you comply. Blackie also invites an occasional tummy pet, but it is as if he likes the idea more than the reality and tends to roll over after a rub or two and send you on your way with a paw push. No biting though.

Our resident cats also perch on their hind legs more than any felines I have ever known. Like the cat in the photo I have had cats that would stand and reach for something, but not as willing to perch that way, sometimes for minutes, as our Cookie and Blackie seem to be. Occasionally they entertain me with their version of cat boxing this way. (If there is anyone out there who has not seen this video of cats boxing in slow motion doing patty cake with commentary – or if you just need a chuckle – have a look here.)

Kim and I have speculated that this is a form of kitty evolution, especially the hind leg standing. Shortly after Kim and I started dating I made him a Valentine drawing of my cats Otto and Zippy, them holding forth in a riotous anthropomorphic party scene while we were out of the apartment, but presumably to disappear magically somehow as we approached the front door. Oh to know the secret life of cats!