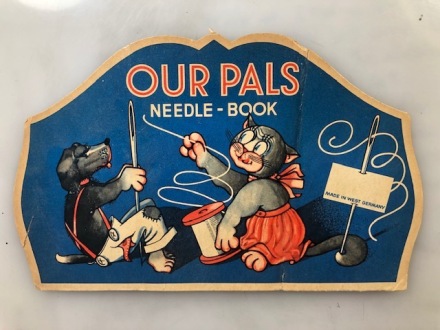 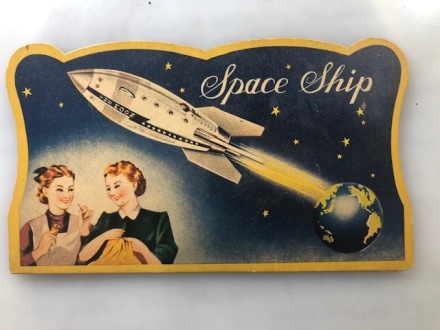 Pam’s Pictorama Post: Not sure what made me pick this up today and decide to share it with you, but here it is. I wrote about my Space Ship needle book in an earlier post (Needled which can be found here) but not Our Pals. Both were purchased many years ago, during a brief time when street fairs abounded on the weekends in New York and included flea market type vendors selling interesting junk. I loved it. A bonus was that chasing them all over town meant poking into areas I didn’t normally spend a lot of time in otherwise, admiring the architecture of old buildings, painted signs or just even shops I didn’t know. There were book sellers, people selling vinyl records, DVD’s and video tapes. I have a great love of pawing through the detritus of earlier times and for some reason I find it very soothing, even reassuring. Sadly while these still exist those more mercurial vendors have been pushed out in favor of a repetitious and limited diet of funnel cakes and cheap kitchen wares.

These two needle books were purchased separately, although around the same time. A quick internet search shows that I scored pretty high – while not rare these are probably among the nicest graphics I see for needle books. Having said that, an eBay shows a few obscure but interesting ones I may need to take another look at – numerous with a variation on Sewing Susan which do not interest, but some with motorcycles tearing across them that are more appealing. There are also numerous variations on space ships and atomic this and that. Surprisingly few seem to have been advertising give aways and I would have thought that a natural. A few seem to have been travel souvenirs – another category I expected to be more robust.

Our Pals seems to be everything I would expect from a book of needles from the 1950’s. The happy anthropomorphic trouser sporting Scotty and dress wearing, oversized kitten, grasping even larger needles and thread, would appear to be logical needle book fare – if such a thing exists. Our Pals notes it was produced in West Germany which helps to date it. I haven’t dug too deep but on the face of it there doesn’t seem to be a lot written about needle books, although I may find that information if I look a bit harder.

The prevalence of space ships, air planes and references to atomic are a bit mystifying. Is the implication that wherever we go in the universe mom will still be mending our clothes with these needles? The marriage of hearth and home and outer space – or the wonders wrought by atomic energy? Perhaps for faster sewing? While there is nothing intuitive about it I can assure you that a large percentage of needle books devote themselves to variations on this theme. While the vast majority of vintage needle books do fulfill stereotypes by depicting mom and the girls at work, the motorcycles and some that refer to the Army may have been a nod at those gents who were also responsible for mending their own togs.

The brightly colored foil insides of these books where the needles lay out has always been a treat for me when revealed. For some reason it is always a bit of a thrill. As you can see, both of these were used although they retain many of their needles – and the Space Ship version even retains its needle threading device. Both seem to want to impress you with being rust-proof and made of steel. The larger one fine tunes its needles by dividing them into the hand sewing versus darning categories. 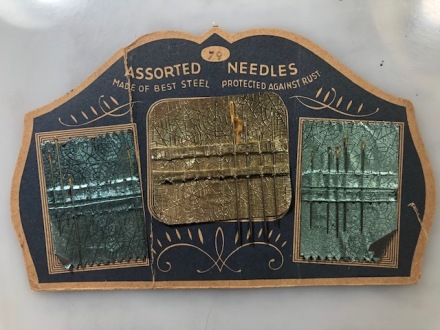 Pams-Pictorama.com collection; inside of the Our Pals needle book 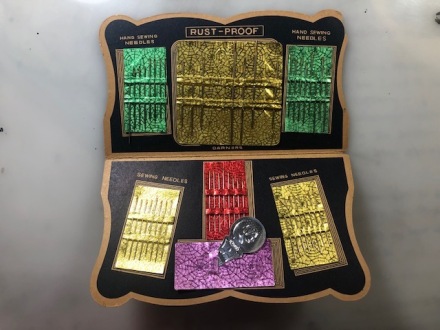 Pams-Pictorama.com collection; inside of the Space Ship needle book

Speaking practically, if these were not somewhat fragile I would press them into service. For those of you who, like me, have at a minimum the need to secure the occasional button, keeping track of those infrequently used needles can be problematic. (I should probably go on record stating that I am, at best, a bit ham-handed when it comes to sewing. A roommate who was working for a dress designer schooled me in button sewing years ago however.)

I do keep a small plastic travel sewing kit – unromantic but it more or less does the job. However, the charm of this version of needle storage is obviously greater and the reason for the traditional sewing box hits home. As I have opined previously, the world of sewing notions seems to be a shrinking one and sometimes even purchasing a needle and thread is a challenge, let alone keeping track of them in our cluttered apartment. Perhaps a small sewing box does hover in my future.