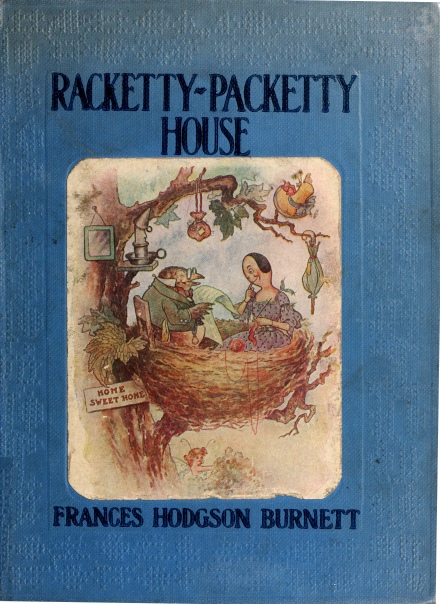 Pam’s Pictorama Post: As I scrape through the remainder of the available adult fiction of Frances Hodgson Burnett I am beginning to turn to the juvenile works. The first I picked up was one I had never heard of called Racketty Packetty House. In researching it I discovered that while I may never have heard of it the book has not been moldering in obscurity – there are more editions than I can count available online – ancient, new and all between – and it would seem it has been continuously in print since its inception in 1906. It is what I think of as an early chapter book for children, too long for a single sitting, novella length.

As I have written in prior posts, our gal Frances was prolific beyond belief and she was clearly churning out her popular juveniles while writing the novels and keeping magazines supplied with stories. (And turning all of the above into plays and ultimately films! My posts on her at this point are too numerous to list and all could be found by searching my site with her name however they start here and I discuss the films a bit here.)

I guess I should warn anyone reading this as a review that there are what could be considered spoilers in it so you may want to come back when you are done reading the story. 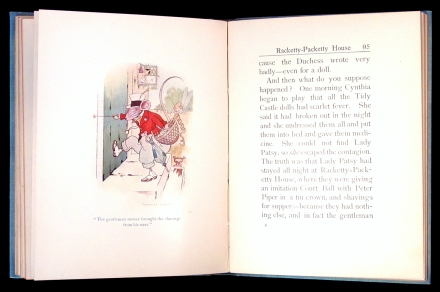 The book contains the ingredients of a children’s classic – anthropomorphic dolls and animals (I especially like that the family pets bring gifts and apologize for their youthful indiscretions of chewing on body parts and a mouse gentleman brings an offering of wood shavings for dinner one evening) with a princess and a few fairies thrown in for good measure. I read the electronic version (I downloaded it on something called Google Play) and was deprived of illustrations which impacted my experience of it. I think good illustrations could really help sell it and looking around online after the fact I believe this is true. (There are also some quite hideously illustrated volumes, with all due respect, mostly of more recent vintage.) I believe the illustrations I am sharing are from the original publication or at least a contemporaneous one in Hodgson Burnett’s lifetime. If the early editions were less expensive and I had more bookcase space I would want to pick one up. 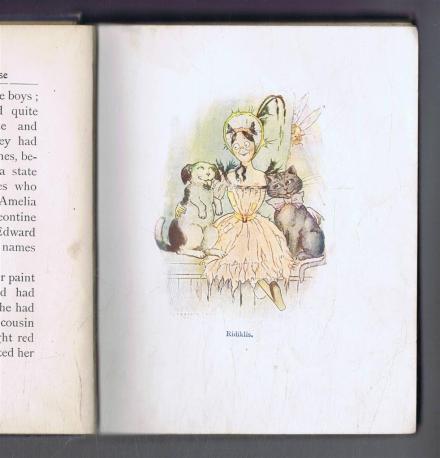 Ridiklis whose leg was chewed off by the dog and cat in their unbridled youth – friends now and they bring offerings such as string to the doll family.

The story is of two dollhouses in a nursery, a dilapidated old one and a shiny new one, the story told from the perspective of a watchful fairy as one is cast aside and shoved in the corner while the other takes center stage and the lives of the doll families within. The new dolls are snooty and look down their noses at the old, ragged dolls – these poor dolls however are jolly and know how to have a good time despite their indigence. The beautiful Lady Patsy doll shows up on the scene and she and Peter Piper (antic ringleader of the poor dolls) and she fall in love.

Funny how all Hodgson Burnett’s tropes are remade for this kid’s story! The poor but worthy (and jolly despite their poverty) find love and are ultimately elevated, financially, socially, in the end. (As I read online reviews this seems to be the primary gripe about her as an author – if you want realism you have gone to the wrong woman I say! I wrote about some of those tropes here and here.) Interesting to me is that she makes the human child owner of said dolls decidedly unlikable – she is a selfish nasty bit of business. Frances Hodgson Burnett did not shy away from portraying unpleasant children.

However, the real reason I decided to write about this story today is that I cannot help but feel that this story planted the seeds for two other significant children’s stories. One I have written about previously and is called The Doll’s House by Rumer Godden. (That post can be found here.) Godden’s book, a similar chapter book for about the same age group, is a classic in its own right. There is a striking similarity in the lives of the dolls and the in-fighting and rivalry between them. That book has a horrific fire in it and the image remained stamped on my memory for years! (Another hugely prolific author, she wrote the book the film Black Narcissus was based on.) The threat of fire hangs heavily over this story as the Racketty Packetty home is perpetually being threatened with being burned as trash and is only saved on several occasions by the hard working fairies. 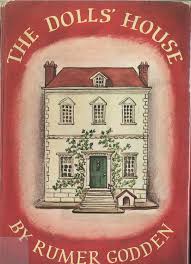 This leads me to the second and more famous story I am fairly certain found genesis in this book, The Velveteen Rabbit. Several key elements make me feel that Margery Williams had this story in the back of her mind when she published it in 1922. First there is the old much-beloved toy versus the new toy/s story-line which is integral to both books. Then there is the rather specific plot device of scarlet fever – in the case of the velveteen rabbit it is how the rabbit meets his corporeal end after helping to nurse the boy through the illness, and in this volume it is the wealthy dolls which all fall ill with it after the irresponsible child in charge gives them all scarlet fever and does not trouble herself to make them recover. They are in turn nursed by the poor dolls and become friends after that. Margery Williams throws in a fairy at the end to help out as well. 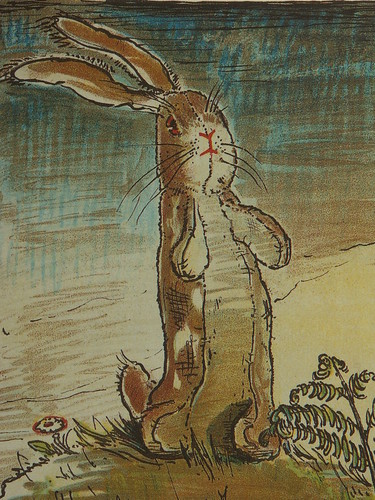 From The Velveteen Rabbit, original illustration by William Nicholson

Unlike these two latter stories, Hodgson Burnett stops short of the indelible horror of the toys being burned as is the denouement of the other two books. (An image of the celluloid doll catching fire in the Godden book may have inspired my overall fear of the frailty of celluloid which I once penned a post about here. I didn’t read The Velveteen Rabbit until I was an adult but am quite sure it also would have scarred me for life.) Instead her toys are rescued by a visiting princess – a very Burnett ending indeed.