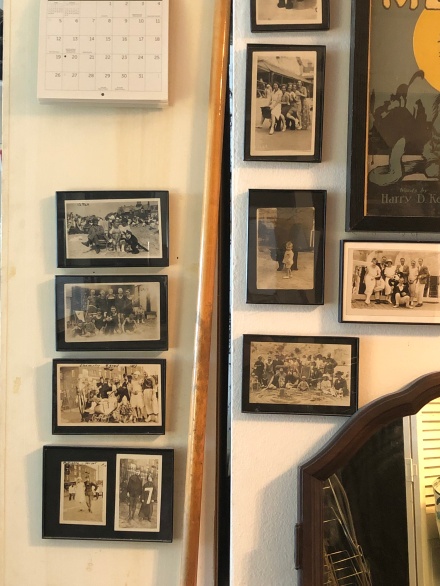 Pam’s Pictorama Photo Post: Living in a studio apartment there is no way that all of my carefully curated photo collection could all ever find life on the wall here. For those of you who have never had the chance to visit us (the majority of you, to say the least), you may have wondered (or not) about which make the cut and what is up on the walls here. I had not given it more thought than the average person until the Covid craze for Zoom calls commenced. These days our photo laden walls are the subject of some discussion by meeting attendees and other video visitors. It has been intimated that guessing what is behind me has become something of a pastime, much like staring out a window in a meeting, when bored. 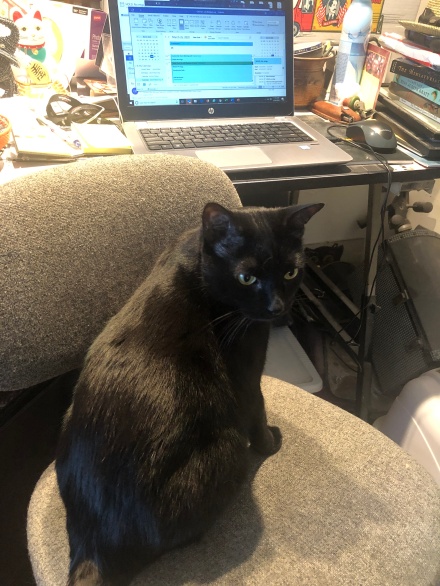 Blackie on my chair recently. He and Cookie love this seat and fight me for this chair all day everyday.

Lucky waving kitty who usually lives on a shelf in my office.

A few months ago I shared details in a post about setting up a new base of operations for my daily grind now taking place here in the apartment. (I wrote a bit about the new work set-up here at Deitch Studio in a post that can be found here.) I spend much of my day now, directly behind Kim, utilizing an old drawing table of mine which I frankly haven’t bothered to clear off entirely. At this moment on my desk I can spy: the Halloween cat head from last week’s post; a hand woven bowl from my trip to South Africa last fall; and two waving lucky money cats. (A post about my lucky cat habit can be found here. I brought the second one back from the office recently, concerned he wasn’t getting any light and helping to make Jazz at Lincoln Center more money – we need it!) And lastly, a photo of the costume jewelry designer, Kenny J. Lane.

My photo of Kenny J. Lane, taken by Eileen Travell and a gift from her.

Ken was an honorary board member of the Met. Sadly he died shortly after I left for Jazz at Lincoln Center. He had been very ill, but nonetheless I was very sad I had not had a chance to see him and so my friend Eileen Travell gave me a very lovely photo she had taken of him for a magazine story several years ago. It sits in my office at work on a shelf above me, where I like to find Kenny looking down at me. I found I missed him and retrieved it as well on my recent trip to the office.

From that admittedly choatic table I do my much of my daily work. (Although recently while Kim is working on laying out a new story I have taken a number of Zoom calls on a corner of our bed, set up with my enormous Dean’s Rag Co. Mickey Mouse looming over me, backlit despite having been told it is a bad effect. A post devoted to big Mickey and his acquisition can be found here. A surprisingly few people have commented on him actually.)

Although I have pledged that I will devote some posts to the most popular view and what is contained there, the space above Kim and his work table, which does contain many of our finest specimens, today however I start with a bit of wall that folks don’t see, but one which will disappear soon. Technically it isn’t actually a wall, but the side of bookcase which for many years has held these photos and is where many years worth of calendars have been kept.

Anyway, I have been encouraged to document the wall decoration a bit and I start with this, which has been my view at the foot of Kim’s table where I have written this blog from, for many years because in a couple of weeks it will disappear. After many months delay, soon we will pack up a bunch of stuff (yep, again) and make room for an entire wall of bookcases. This was the next stage of renovating our tiny abode which was scheduled to happen a few months after recovering from the kitchen renovation, but which has been long delayed by the quarantine.

The installation of bookcases and cabinets along the entire wall will hopefully relieve some of the ever-looming piles of books, art, dvd’s, and yes, photographs and even toys, that are currently like topsy everywhere. It does mean that the existing, scattered bookcases will depart including this one. For some reason it only just occurred to me, the other night at 1:30 AM when I couldn’t sleep and decided to worry about things for awhile, that this sliver of bookcase would be gone soon, replaced by my work table moving into that spot after it is displaced by the new bookcases. Where will the calendar go? And the paint pole we use for exercising?

The bottom two images are strange favorites – Halloween photos from a Brooklyn parade in 1917, which I purchased in multiple separate lots but of the same gathering when examined closely. I did an early post about them, back in 2014, which can be found here. I find them unfailingly cheerful and of continued interest.

Lurking above these are two nice examples of photo postcards of Felix at the beach. Pictorama readers know these are like catnip to me and these two examples have been featured previously in posts, here and here.

Photo featured in All in the Family, a January, 2018 post. 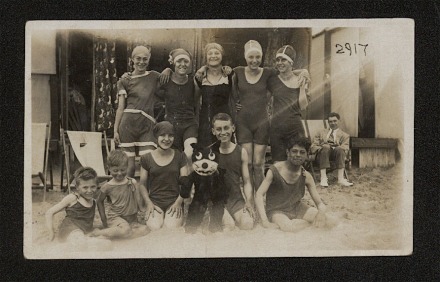 Not in danger of are several real photo postcards of people posing with giant black cats, the corner of some sheet music, and a few other gatherings with Felix at the beach. Those will have their due in a future post, as I go around the room. There is also the top of an ancient mirror that came from my grandparents house, oddly hinged, and weighing far more than you would imagine.

Somehow I manage to be both the necessary agent for change here at Deitch Studio (the bookcases, like the kitchen renovation, are my idea) and still panic about it. I have a cat-like dislike of change and wrestle with the need at times – check in with me at 3:00 am in the coming week. As we start to pack up bookcases and hopefully even shed a few things starting next weekend, I hope I can quell my fear of having to find a new place for these beloved photos, the paint pole, and a heavy metal door jam in the shape of a black cat you don’t see in this photo but is directly below. There will be a week or so of upheaval, hopefully resulting in a few more feet for exercise and reveal part of another bookcase I have not been able to access for several years. Wish us luck with the bookcases and more to come on that I bet!