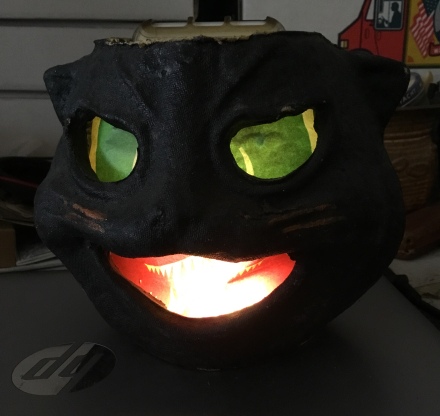 Pam’s Pictorama Post: I am possibly one of the last people in this country to actually buy something off of Instagram. Somehow, all this time, Instagram has remained sort of pure – few if any ads hit my stream, just an endless stream of mostly interesting and often happy making, (frequently) feline. I follow a few vendors, DL Cerney, maker of vintage inspired clothing (I once wrote about them in a post here), notably among them.

However, for the most part, cheerful consumer though I am, until recently I had never purchased anything off of Instagram. I know people do, I was talking to a friend from North Carolina who said she has spent a fortune on Instagram while grounded from traveling from her job in banking. 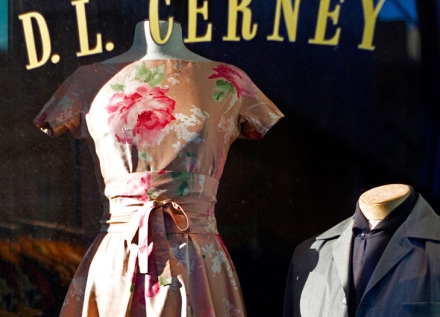 I only add people to the feed occasionally, mostly keeping away from politics and famous folks, and I try to put out in the world what I like to see myself. There are photos of the cats, my neighborhood, toys, art and music. When I traveled for work I posted those photos and I frequently posted from Dizzy’s and other shows.

Like this blog, I do it purely for pleasure and therefore focus on what makes me happy. I have happily watched fostered kitties, Rupert and Pumpkin, join the two glorious gray Persian kits, Bam Bam and Mr. Biscuits, in the cheerfully chock-a-block filled home of the people known only to me as fatfink and Motivated Manslayer. (I knew from day one those kits would join that household permanently. Like my father used to say about my mom, What foster? Cats come into this house but they never leave.) I follow the conservation studios at the Met and keep an eye on what they are working on, see what my friend Eileen is doing in Vermont during the quarantine, and keep track of Eden out in Santa Barbara.

However, I acquired a follower recently who had a nice Halloween cat head as her avatar and the moniker of missmollysantiques. A look at Miss Molly’s account showed a glory of rather interesting item images, including several black cats, and so I made a rare add to my feed. What I didn’t realize is that she is a seller of such items and shortly after adding her she had a sale.

Well, my somewhat latent buying gene kicked back in and I purchased this beauty of a black cat-o-lantern almost immediately. (Several photographs followed subsequently and perhaps you will see those in coming weeks although I am a bit slow for the fast pace of purchasing this way. As I hesitate a minute or two too long an item is snatched away. This is speed buying.) Miss Molly appears to be a young woman from St. Louis, Missouri and she is evidently selling out the holdings from her space in an antiques mall there.

I have known for years that I wanted a specimen example of one of these early paper mâché Halloween cat heads. I remember the first time I saw them was in Cold Spring, New York at an antique store that had a fabulous display of early Halloween items and toys. They were priced far beyond my means, but I was fascinated by them – the jack-o-lantern pumpkins as well as the black cats. I believe it was awhile longer before I saw one of these heads that still had the paper insert and that was sort of another kick in the head revelation too. 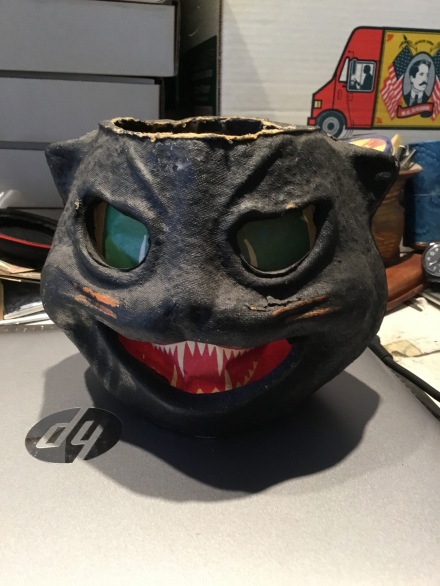 Halloween collectibles are a deep and heady genre to themselves and have always been pricey. Despite a prevalence of black cats I have only nibbled around the edges of it. I bought a number of reprints of the turn-of-the-century, do it yourself holiday decorating books by the Dennison paper company. (I wrote about them in a popular post that can be found here.) The arrival of eBay softened the Halloween market somewhat, but at the high-end objects remain dear. I paid up for this item, fair market value anyway I would say. I think it was in part pent up desire, but also it was just there for the buying and bam! It is mine. No buyer’s remorse here. 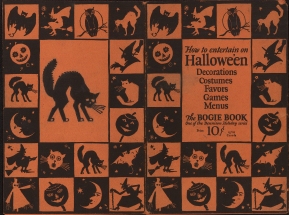 On one hand these jack-o-lanterns (I think of this as a cat-o-lantern) are somewhat primitive by the slick standards of today. However, the paper mâché is strong and these have held up to decades of use with only signs of wear around the edges and ears. It is fragile, yet oddly sturdy too and the inside smells of age and paper glue. I believe this kitty was likely made in the 1930’s, a generation or so after the introduction of such items, some coming from Germany and others made in the United States.

I cannot imagine how putting a candle in this did not result in a fire, but it is early for there to have been another light source option. (There is no evidence of candle use inside this one. As you can see if you look carefully, I have employed my cell phone flashlight here.) Miss Molly was offering this cat and another, cat head on a fence design which I liked, but the condition on this one won me over. 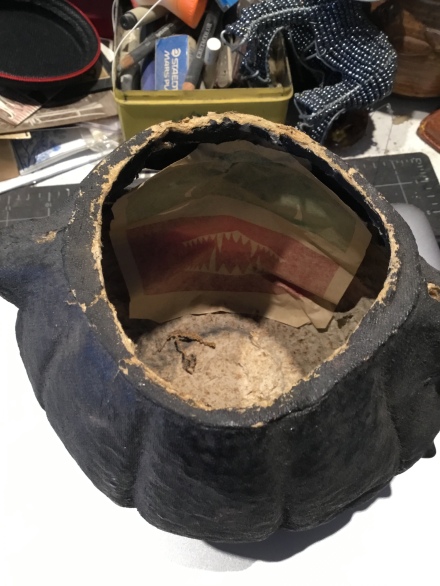 Inside the cat-o-lantern, no evidence of lit candle use.

I might have given him a few more whiskers if left up to me, but he is nicely molded around his eyes, nose and mouth and the back of his head is shaped like a pumpkin. (Imagine a line of these and some pumpkin heads lighting up a nighttime window while you trick or treat.) I might have been tempted to lavish more orange paint details on him, but once you see him with a light inside you realize all that is unnecessary. He is in his glory in the dark and lit up from the inside!