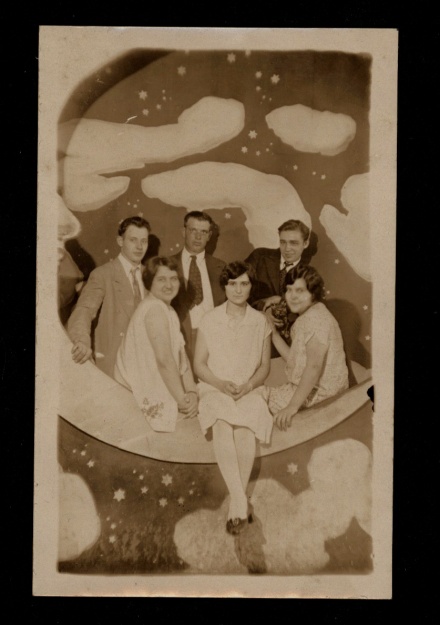 Pam’s Pictorama Photo Post: It has been a long time since I bought what I call a moon photo. When I first started collecting I looked at them endlessly, purchasing a few along the line. One is pinned up in my office – that place I used to go to daily and have barely laid eyes on for the past seven months. I realized the other day that I missed seeing the toys, photos and sheets of early music adorned with cat imagery that I surrounded myself with there. I retrieved a few things on a trip in recently, but am thinking I may need to rescue a few others on my next trip. (This very special box made by Kim resides on my desk there and I think it needs to come home to my now home office desk on the next trip. I wrote about it once here,)

Years ago I saw a wonderful accumulation of moon photos, all framed together – each one top notch. It was at an exhibition at the Metropolitan Museum. A quick search on their website shows some really great ones (you can find them here), but it was the great eye that had put them together in a frame a certain way that appealed to me. Some things seem to be better when you amass good examples of them together for display. If I had the space I would consider investing the time in creating a nice moon photo grouping like that. Instead I have my wall of people posing with Felix-es I guess. (The photo below from an April 2018 post which can be found here.)

When I first considered taking up photography (both the collecting and the taking) it was the idea of the sort of joy that people seem to bring to posing for photos like this that interested me. It is the same with folks posing with Felix – they get a big smile on their face just by being there. It remains one of my goals in life to find a moon set and get my photo taken in it. I briefly wondered about building our own moon photo set, but there are some things a studio apartment really cannot accommodate, no matter how creative you get.

An early entry into my collecting was featured in a short post at the very beginning of this blog. It is below and 2014 post can be found here. It is a nifty variation – a full moon and it seems like a professional postcard that was produced en mass rather than the sort of individual snapshot. Still, for me, all moon photos are of interest. They can run into a lot of money and if seriously collecting them you would be forced to pay up for the most part. Therefore, given my other weaknesses, I am a somewhat desultory collector of moon photos.

Today’s photo interested me in particular because one of the participants is holding a small animal – I am guessing dog although one could make the argument for cat. The man in the dark suit is holding it in a grip my father used to call cat prison – holding the kitties, with both of this large hands, in this no nonsense sort of hold – usually when they were within reach and doing something somewhat undesirable. It was not cat-escapable. When ultimately released the cat would shoot forward like a feline missile. Annoyed at the interruption of its wrongdoings and the temporary containment and limitations imposed on its inalienable freedom.

It seems to me that dogs don’t seem to require this sort of strong arming for photos under most circumstances – they usually get with the program pretty quickly and pose with the family. Either way I have an extra soft spot for folks who bring along the family pet for such photos.

That roguish fellow with pet notwithstanding, our photo participant posers are a fairly serious looking group. Two out of three women are smiling – the woman in the middle isn’t and I don’t know why because she has the best spot, smack in the middle, white stocking legs, ankles crossed, hanging right over the edge of the moon. The photographer had a good eye for this set up and composition. It is a bit faded, one imagines that the developer used was probably well into its long day of use.

The set is a slightly less imaginative one than some and sadly the moon face is largely cut off from view – I always like to see those variations and here we just see the tip of the nose. (The photographer loses points for that. He or she also loses a few points for the distinct shadows behind the people which kill the illusion to some degree, although it does give us a better sense of the construction of the set.) The clouds are a tad lumpy, but there are stars which I tend to approve of in my moon sets. The card, like most of this kind, was never mailed and there are no notations on the back.

I leave you today with a snapshot of the Felix photo wall – there are a few additions pending and soon it will march over the ajoining top of the kitchen door and ultimately wander down the other side. (There is another, smaller annex of Felix photos, tintypes, in the hall near our bathroom.) Small apartment or not, I always say there’s always room for one more Felix photo.